Home Activism Where are the concrete programs to address Black on Black violence?
Activism

Where are the concrete programs to address Black on Black violence?

A Northwestern study released at the close of last year showed that violent crime nationally is declining but unveiled an increase in murders by and of young Black men in America. When focusing on the period between 2000-01 and 2006-07, the study found Houston leading a list of 28 U.S. cities, with a 139 percent increase in the number of young Black suspected in killings by offenders ages 14-24.
A coalition of community leaders, clergymen, and celebrities joined forces at a January 15 press conference to announce an emergency Black male summit with a critical element of block by block follow up.

â€œIt does not do us any good to keep hosting summit after summit and not having any mechanisms in place by which to measure our progress. We need concrete solutionsâ€, said activist Quanell X to the local media.

The coalition will also unveil the soon to be composed Stop the Killing Manual for Survival that will serve as a guide for conference goers on how to take back control of their neighborhoods and measure progress.

â€œThe manual can only be effective if we as leaders are seen in these areas of high crimes helping our people solve their problemsâ€, said Bro. Quanell. â€œAfter the summit, we are going to galvanize three hundred men to take over complexes with the highest murder rates and drug dealing. If you are too scared to get out into the streets, then stop calling yourself a leader.â€

Bro. Quanell noted that the summit is also open to Hispanic males and there is a plan to feed 300 needy families on that day as well. Weekly planning meetings will take place after the summit and a statistical assessment will be made in 2010 to see if the post-summit strategy has reduced crime in pinpointed areas.

â€œThe Honorable Minister Farrakhan recently pointed out that the federal government found money to bail out corporate thieves and robbers but because of misplaced priorities, canâ€™t seem to find the money to improve educational systems in American citiesâ€, said Deric Muhammad of the Nation of Islam. 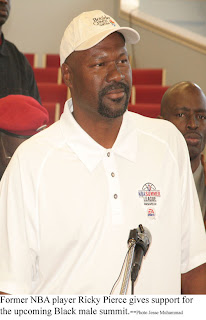 Former NBA star Rickey Pierce told The Final Call â€œI am supporting this effort because we are losing our young boys. More of us retired athletes need to get involved like this but most of them have not found their calling beyond sports. I have found mine and thatâ€™s helping my community.â€

The study, titled The Recent Surge In Homicides Involving Young Black Males and Guns: Time To Reinvest in Prevention and Crime Control, was co-authored by Northeastern University criminologists James Fox and Marc Swatt.

The number of Black male juveniles murdered nationally increased by 31 percent and the number of Black perpetrators by 43 percent over a five year span starting in 2002. According to the report, those statistics were even higher when guns were the primary weapon used.
Houston Police Chief Harold Hurtt is disturbed by the study and worries that the present economic strain will only increase the youth violence. To address it he says â€œit will take a lot of work and concerted effort.”

In a press conference, Mr. Hurtt called on schools to increase supervised after-school activities. He suggested that neighborhood groups provide an adult presence at parks and playgrounds as well as â€œbusinesses and clergy find ways to provide part-time employment for teensâ€, he said.

Pastor Arthur Brooks, whose church is situated in the crime-ridden Fifth Ward Area, said â€œmost of our young boys in the streets have found something to die for, now we need to give them something to live for. We are calling on all pastors to join this effort.â€

Other cities showing dramatic increases in Black killings included Boston (up 78 %), Oklahoma City (up 85%), and San Francisco (up 79%). The Northwestern study was released during the same time HPD announced that the citiesâ€™ 2008 homicide totals were down more than 16 percent from the previous year but increased in Harris County.

Promoting Peace in the Streets of New Orleans

Hundreds Protest in Houston: ‘Killing Women and Babies is A Crime’