Houston, TX-Queendom Come, Inc. (QCI) will host a press conference Thursday, March 30, 2017, at 4 p.m. to launch its #ProtectOurDaughters campaign to address sex and human trafficking in the Houston area. Sex trafficking had become the new “slavery” and has taken national attention when a dozen of black and Latina girls went missing in Washington, D.C. this month. According to the U.S. Department of Justice, Houston is one of the largest hubs for human trafficking in the nation and the largest hub in Texas Houston has over 200 active brothels, with two new openings each month.Houston is a popular entryway for internationally trafficked persons due to its two large, international airports and the Port of Houston, which is the largest international port in the United States and the thirteenth busiest in the world.

Age is the primary factor in vulnerability. We are seeing our daughters becoming victims to this modern-day slavery. Pre-teen or adolescent girls are more susceptible to the calculated advances, deception, and manipulation tactics used by traffickers/pimps – no youth is exempt from falling prey to these tactics.  Traffickers target locations youth frequent such as social media sites, schools, malls, parks, bus stops, shelters and group homes. Runaway or homeless youth, as well as those with a history of physical and sexual abuse, may have an increased risk of being trafficked.

QCI has launched an educational and awareness campaign that targets women, adolescent girls and their parents in the Houston and surrounding areas. QCI has collaborated with other organizations in the community and women leaders such as, Green House International Church Co-Pastor Sandra Deckard of Greenhouse International Church, Kathy Griffin Grinan of “We’ve Been There Done That”, Valerie Muhammad of the Nation of Islam MGT & GCC, Calandrian Simpson-Kemp of the Village of Mothers, Jinaki Muhammad of the National Black United Front, Attorney Sadiyah A. Evangelista of the Ministry of Justice Millions More Movement,  Deric Muhammad and Pastor E.A. Deckard of No More Blood Shed Movement and Deloyd Parker of SHAPE Community Center. A town hall meeting will be announced at the press conference.

The battle between popular Houston rapper Trae the Truth and 97.9 The Box continues. The artist has now called for a town hall meeting themed “Can’t Ban The Truth” to be held at the 40-year-old landmark S.H.A.P.E. Community Center (3815 Live Oak) on June 3 at 7:30pm.

“This town-hall meeting might make it to where they never play my music again. At the end of the day, if that’s what they do, they’ll have to answer to God one day,” said Trae to the Houston Chronicle.

As reported previously on my blog, on May 5th, Trae announced the filing of a lawsuit in the 189th District Court of Harris County Texas against Radio One Inc., which owns and operates Houston radio Station 97.9 KBXX, The Box.

The civil case alleges a consistent pattern of business disparagement, conspiracy and tortious interference. Defendants include Radio One, the radio stationâ€™s general manager Doug Abernathy, program manager Terri Thomas and morning show radio personality Nnete Inyangumia. Trae decided to file the lawsuit after the radio station officially banned his music from receiving airplay and began to interfere in his relationships with other music industry professionals. Radio One is the seventh largest radio broadcasting company in the country, and is the largest one targeting African American audiences in the U.S. The Box is the only hip hop radio station in Houston.

The suit, which was filed by Houston attorney Warren Fitzgerald Jr., alleges that Trae was the subject of a radio ban after Nnete falsely accused Trae during an on-air interview of causing the violence which occurred at a public festival which he sponsored.

Says Trae, â€œI just could not let any more people suffer and be punished by the radio station over this ridiculous vendetta.â€

Community activist Deric Muhammad is assisting in hosting the townhall meeting and he recently posedt this comment on Twitter, “How can 97.9 the BOXX criticize labels for artist oppression, yet refuse to play @TRAEABN ‘s records because of personal disagreements?”

So far,the judge in the case denied a temporary injuction against 97.9 FM and a new hearing has been set for August 16.

Will keep you posted on the town hall meeting and developments in this case!

Through the Lens of Brother Jesse: “My Hands. Your Braids. One”

I am always rolling through the Black neighborhoods of Houston, Texas looking for moments to capture. On this particular Saturday, I was riding through the streets of Third Ward and arrived at the historic SHAPE Community Center.

I saw this sister braiding outside on the park bench. The Sun was shining. Weather was perfect. Children playing. The brother was basking in the Sun as this sister was in deep concentration.

I call this one: “My Hands. Your Braids. One”

Photo taken in Black and White with my Canon Rebel XT.

The S.H.A.P.E. Community Center is a landmark not only in Houston but the country. We call it the “United Nations of the ‘Hood” because it has hosted every type of leader and organization you can think of. Everyone is welcomed by its founder Deloyd Parker, who has been an example of true leadership, which is service to the people.

This is why it is only fitting that I dedicate this space on my blog to their upcoming 40th Anniversary Reunion Celebration on November 13-15, 2009. For the full schedule of events please read their flyer below and to learn more about the S.H.A.P.E. Center Log on to: http://shape.org/ 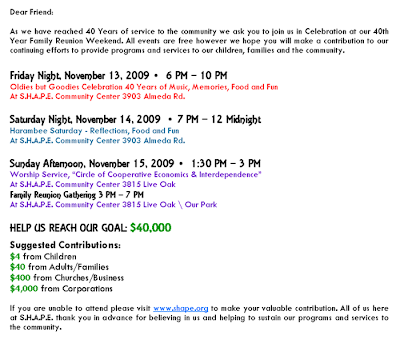 by Jesse Muhammad for The Final Call Newspaper

In that sea of men stood then Columbia College film students Glen Towery of Los Angeles and Linus Michael of Kenya. Armed with thousands of dollars in donated equipment, both made the trek to the nation’s capitol with the goal of documenting what would be a life-changing experience for them.

â€œI actually did not know about the march until one of my friends called me two weeks before the gathering,â€ Mr. Towery told The Final Call.

The Million Man March was convened on October 16, 1995, to call Black men to atonement reconciliation and responsibility. A day of no school, no work, no play was declared.

â€œThat friend literally told me that I was going. I was in film school so I really couldn’t afford to go but so many people supported us,â€ says Mr. Towery, 57.

â€œI felt it would have been improper for me as a film student to go there and not document that day. I had to help preserve it.â€

The fruit of his work is now being shown in cities across the country in his documentary titled Glenn & Linus Michael Attend the Million Man March. The film chronicles their experience at the march. In over an hour of footage, images of men arriving, chanting, embracing, gang members uniting, powerful speakers, and exclusive interviews are shown.

â€œWe have to rekindle the spirit of that day. With this film I wanted to capture that spirit, package it and touch our men,â€ says Mr. Towery, who has won many awards the last several years including the Black Filmmakers Hall of Fame award.

A large audience in Houston attended a viewing on September 12 at the Shape Community Center. Dwayne Muhammad, who attended the march, spearheaded the event out of a desire to â€œinspire us as men to never forget what we witnessed on that day.â€

Latif Salley, who was touched by the march to launch a Texas charter school, was moved while viewing the film. â€œThis documentary brought back a lot of memories. It is truly remarkable,â€ he says.

Mr. Salley is one of the many success stories born out of the march. The march inspired men to launch businesses, helped to decrease crime, increased membership in Black organizations, mobilized millions to become registered voters and overall ignited men to take charge in their communities.

â€œWe cannot let the spirit of that march die. We are going to show this film over and over,â€ says Deloyd Parker, founder of the Shape Center.

â€œI literally got chills just watching the trailer of this film. It is so touching and should be shown everywhere,â€ said Nation of Islam student minister Robert Muhammad.

Read the full article at: Preserving the history of the Million Man MarchFor more information on this documentary log on to: 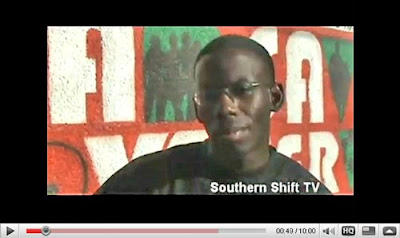 Legendary Hip Hip journalist Davey D recently visited Houston and called me up to do a quick interview. We met up at the historic SHAPE Community Center in 3rd Ward. Click below and watch as we discuss the history of the Shape Community Center, the importance of Black-Brown unity and how that will make Texas better. Lastly we spoke about the Houston Hip-Hop scene plus Texas’ growing pains and how its bringing out racists.