Nation of Islam Student Minister Nuri Muhammad was recently invited on the Joe Budden podcast to discuss the Godfather of Harlem television series and address the question of “Who Really Murdered Malcolm X?”.

Nuri Muhammad stated that it was not the F.O.I. (Fruit of Islam) who killed Malcolm X but it was the F.B.I. (Federal Bureau of Investigation). Salute to Joe Budden for having a member of The Nation of Islam on his show.

This was a much needed discussion. Watch and comment!

New Orleans – Student Minister Willie Muhammad of the Nation of Islam in New Orleans, along with brothers of Muhammad Mosque No. 46, recently visited the Travis Hill Facility, a new school that opened in August 2016 inside of the Youth Study Center (YSC), that serves as the juvenile detention center for Orleans Parish. YSC provides pre-trial detention to youths between the ages of 14-17 who are charged with committing a delinquent offense that ranges from armed robbery to murder.

The school was named after recently deceased New Orleans native and musician, Travis “Trumpet Black” Hill, who used music to turn his life around after serving 9 years in prison for armed robbery. The first-time Student Min. Willie Muhammad visited the school was during a speaking engagement that was arranged for Student Min. Nuri Muhammad of Indianapolis, during his visit to the city of New Orleans. Brother Nuri spoke to the youth about not allowing the cell they resided in to become a tomb for them, but for it to be a womb for growth and new beginnings. Many questions followed Student Min. Nuri’s talk, including questions about the Holy Quran, Malcolm X, the Honorable Minister Louis Farrakhan, and the Nation of Islam. As a result of the inquiries, Student Min. Willie vowed to get each of them a copy of the Honorable Elijah Muhammad’s book, “Message to the Black Man”, and the Honorable Min. Louis Farrakhan’s “Twitter 2.0” book that contains questions from his twitter followers and his answers to those questions.

Student Min. Willie created an on-line social media campaign to request donations so that the books could be purchased. The request was met with great support. By the time Student Min. Willie returned to the facility to talk to the young men, the donations had doubled which allowed them to give out more books to the youth housed at the facility. The young men were excited that members of Muhammad Mosque #46 returned with the promised books.

Student Min. Willie spoke to them about the value of gaining knowledge of themselves. “I related the ‘cells’ they are housed in to the cell as being the building block of life,” he added. “A cell is also how the life of a human being begins. I told them that they must use this period of confinement to grow just as the cell while in the mother’s womb grows and develops as well. We spoke to them about using this period of confinement to undergo a new birth so that they leave the facility when their time is up as a new person.”

Student Min. Willie emphasized that in order for them to experience this new growth, they needed an essential component to spark and nurture their growth; that essential ingredient is knowledge of self. “I told them that the knowledge contained in that book (Message to the Black Man) transformed Malcolm X, who had become known as ‘Satan’ in prison,” he told the audience of attentive youth. “It was the Teachings of the Most Honorable Elijah Muhammad that transformed the man nicknamed ‘Satan’ to be an instrument of salvation for thousands. I told them the same can happen for them if they start to delve into the transformative knowledge found in those books,” Student Min. Willie added.

Cairo Kwame, local community activist, also visited YSC and witnessed the excitement the young men exhibited when the brothers of the Nation of Islam walked through the door. “I have not seen any other group or organization that gets that type of response. I believe that the medicine the Nation of Islam has is the best for our people at this time,” he noted. “These young men are so attentive because a lot of them have hit rock bottom. Look at our juvenile justice system where some of these young men are facing 99 years for crimes where no one died.

The young brothers were excited about the books and some started reading them as soon as they got them. They asked that the brothers of Muhammad Mosque No. 46 come back to see them.

Whether you are looking on how, when and where to plant your love or you want to get rid of the weeds in your current marriage and enhance it with divine fertilizer: This book is right for you!

“I’ve been under positive peer pressure for years now from the Believers,” says Nuri Muhammad on why he finally decided to release the book. “Being on the road and always being pulled to a sidebar for relationship problems has led me to put this project together. I’m convinced that when home is a place that drains rather than our place of recharge, we lack the energy to be the help The Honorable Minister Louis Farrakhan needs and deserves.”

He said he also wanted to introduce marriage God’s way as taught by The Most Honorable Elijah Muhammad in a ‘user friendly’ way to our people.

Get your copy personally signed by Nuri Muhammad at Saviours’ Day 2016 in Detroit! Online purchases and E-Book available @ NuriMuhammad.com

Building upon momentum from being the host city to the Honorable Minister Louis Farrakhan and the 14th Anniversary of the Million Man March, hundreds of men convened in Memphis, Tennessee for a day-long forum aimed at carrying on the resonating theme of accepting responsibility to build our communities.

Instead of just rehearsing the problems, the January 9 Mid-South Menâ€™s Forum brought together a wide spectrum of leaders to create tangible and executable solutions to the spiritual dross, economic disparities, educational deficiencies, and crime that is plaguing the Memphis and Greater Mid-South Black communities.

The closing keynote address was delivered by Student Minister Nuri Muhammad of Indianapolis, Ind. He spoke passionately about true manhood, the guidance of Godâ€™s Word and insight into the oft-repeated Lordâ€™s Prayer.

â€œMan should be working towards getting his daily bread by becoming an entrepreneur,â€ said Brother Nuri, whose message was received with multiple applauses. â€œWe should look at the Word as a script of life.â€ 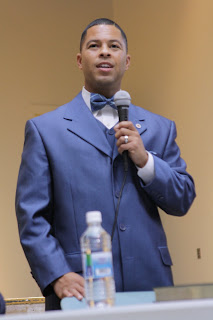 The importance of ownership was the common theme from all the speakers who made up the panel at the Ben Hooks Job Corps center. Demico Boothe shared his story of transitioning from serving 13 years in prison to now being an agent of change to halt young men from going down that road.

â€œWe are missing the Black love and this is what our children needâ€, said Mr. Boothe, who is the author of Why Are So Many Black Men in Prison?, a comprehensive account of how the prison industry has swallowed up his fellow brothers.

â€œWe have talked about the problems to death but we need solution-oriented and results oriented forums like this. We need to act before itâ€™s too late,â€ said Mr. Boothe.

The top follow up plans for the forum includes the creation of a Loan Pool/Angel Investment Fund for Black and Hispanic business owners through a cooperative savings club; community canvassing to increase the presence of strong Black men in the most challenged neighborhoods; and the adoption of two under performing schools in the Memphis City School system to provide mentoring and support.

â€œThere is no greater enforcement than us enforcing ourselves,â€ said Grandmaster Anthony Muhammad of Chicago, who provided a self-defense demonstration. â€œThis is our community and no one violates this, less we violate them.â€ 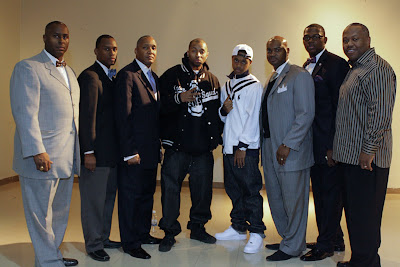 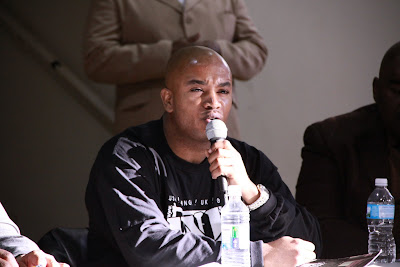 â€œA forum like this is important because so many of our people are lost. The more knowledge we have, the better we can do. Education is the beginning solution we have to our biggest problems culturally,â€ said Drumma Boy, a Memphis based music artist and producer.

â€œThe spirit of the menâ€™s forum was wonderful. Our goal is to continue motivating Black men to accept responsibility to build our own community. We plan to do what we say and say what we do,â€ said Tedarrell Muhammad, who heads the Nation of Islam Southaven Study Group and helped to co-organize the menâ€™s forum

â€œThis was a historic moment for Black Men in the city of Memphis and the Mid-South,â€ said Kareem Ali, co-organizer of the forum. â€œThis is a sign of Black men maturing and growing into a new mind and taking action steps to take responsibility to build our communities.â€ 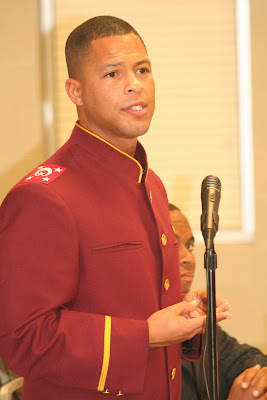 Adorned in the uniform of the Fruit of Islam….powerful in his delivery of the Teachings of the Most Honorable Elijah Muhammad as taught by the Honorable Minister Louis Farrakhan….words resonating with the audience.

The one I write of is Nation of Islam Student Minister Nuri Muhammad of Muhammad Mosque No. 74 in Indianapolis, Indiana. He was invited to Texas to speak in San Antonio and Austin as the keynote for two critical community events. The one focus of the two gatherings was to spread the theme of the upcoming Saviours’ Day convention which is “Accepting Responsibility to Build Our Own Communities”.

On January 29 he spoke at the Carver Library in San Antonio at the event coordinated by Brother Rickey X and the Power of One group. The next day he would address an excited audience at the YMCA in Austin, which was coordinated by student study group facilitator Brother Robert Muhammad and the Austin Study Group members.

At both events, Brother Nuri would electrify the audiences. “Usually when you hear the word responsibility, people start running. But from the looks of this turnout, you all are not afraid of the word”, he said in Austin as people smiled. “Many of us don’t want the responsibility. Many of us want the teachings but we don’t want the training and the discipline that goes along with that teachings.” 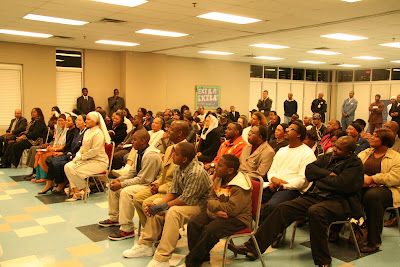 Bro. Nuri joined the NOI in 1992 at seventeen years old. After working hard in Chicago, Bro. Nuri officially became the student minister of Mosque No. 74 in 1996. The Mosque soon increased its membership while purchasing and renovating a state of the art facility affectionately called the â€œMiracle on 38th Streetâ€. “The Miracle” houses the new Mosque, Muhammadâ€™s School (a K-6 elementary school), Bismillah Childcare Ministry and Learning Academy (a pre-school for ages 3 months to 5 years), Nu World CafÃ© and Studio 74 Barber and Beauty Salon. He is also a proud husband and father.

Look for more coverage on these two events in an upcoming edition of The Final Call Newspaper.