Tweet This: Big Surprise At the #FTA100 Awards Ceremony 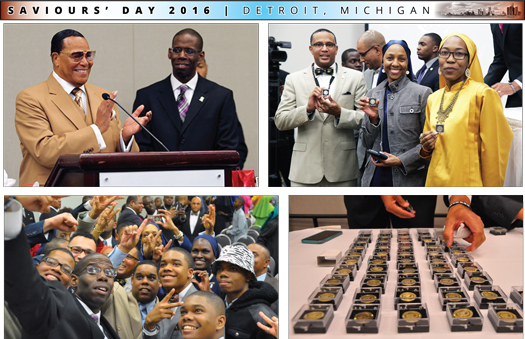 (CW From Left) The Honorable Minister Louis Farrakhan congratulates the honorees at the Farrakhan Twitter Army Awards Ceremony Feb. 19 as the Commander of the FTA, Brother Jesse Muhammad looks on. | Brother Byron Muhammad, Sister Ebony S. Muhammad and Sister Shareefah Muhammad display their #FTA100 lapel pins. | Brother Jesse Muhammad takes a selfie with some of those on the digital battlefield. | On display are the #FTA100 lapel pins designed by the company called Mosque Flow

On Friday, February 19, Saviours’ Day 2016 kicked off in a very unforgettable way. While most weren’t anticipating the appearance of the Honorable Minister Louis Farrakhan until Sunday, he literally shocked the entire Nation of Islam, in particular the Farrakhan Twitter Army, by attending and giving the official “State of the Tweet Union” address to the social media soldiers and everyone else in attendance.

The special occasion was the Farrakhan Twitter Army (#FTA100) Awards Ceremony hosted by the owners of Mosque Flow, a high end jewelry line that has designed the official Farrakhan Twitter Birds in honor of the top 100 digital warriors who spread the words of Min. Farrakhan over various social media platforms.

This ceremony also was a tribute to Min. Farrakhan’s work in speaking truth to power for over six decades.

Along with defending the Minister, the Twitter Army created avenues of dialogue for the masses to learn more about the Nation of Islam. It had been nearly three years since the Twitter Army held an event recognizing those on the digital battlefield and discussing the importance of social media as it relates to information warfare and building bridges and brotherly love.

The ceremony opened with words by Bro. Jesse Muhammad, Farrakhan Twitter Army lead and social media strategist for Min. Farrakhan and the Nation of Islam. He thanked the Minister for his 60-plus years of sacrifice as well as Mother Khadijah Farrakhan and the entire Farrakhan family.

From there he officially welcomed everyone to the first ever Farrakhan Twitter Army (FTA100) Award Ceremony, recognized the 100 award recipients and thanked those in the room and Twitter soldiers watching live via webcast.

Bro. Jesse acknowledged two sisters who each gave their testimony of how the Farrakhan Twitter Army impacted their lives.

Khadijah Muhammad from Memphis has been defending the Minister on the platform Tumblr for five years. She expressed that even on Tumblr people were spreading false information about Min. Farrakhan and the Nation of Islam.

The founder of Mosque Flow, Bro. Jeffrey Muhammad of Austin, Tx., and sons Maajid and Ahmad were introduced, who then gave out awards of specially designed lapel pins to each of the #FTA100 honorees. The crowd stood and cheered as each member was gifted and congratulated.

Just as the last few honorees were called, in walked the Honorable Minister Louis Farrakhan. The expression on his face was of great joy to see the Farrakhan Twitter Army members awarded.

In his remarks, the Minister acknowledged the great work of the Twitter Army and said he would like the 100 awardees to grow to 10,000. Min. Farrakhan said those in the Twitter Army are his ministers in their ability to engage the public with the Teachings of the Honorable Elijah Muhammad. He said the instrument of the internet allows the Nation to bypass the controlled or mainstream media, which means the controlled media has in essence lost control.