Captain Khallid Greene, a Captain with the Inner-City Emergency Response Team/Department, is a man on a mission to bring â€œAwareness to Emergency Preparednessâ€. As we approach the 2010 Hurricane season Captain Greene wishes to bring awareness to the seriousness of being prepared during natural and man made disasters.

Captain Greene seeks to highlight the Inner-City Emergency Response Team, Volunteer Fire Departments, Emergency Medical Services, Community Emergency Response Teams(CERT), Fire departments, Industrial Emergency Teams, Law Enforcement agencies and the Thousands of emergency management and volunteers that are committed to mitigating disasters and saving lives.Inspired by his teammate and now coach, Noah Rattler, Captain Greene thought it would be a wonderful idea to make the journey from Galveston to Houston by foot and raise the issue of being prepared during these perils times. So often we see look for the destructive forces of Hurricane winds to come from Galveston. Captain thought it would be great to bring information, and awareness along the same evacuation route that many will used if forced to evacuate the City of Galveston. Captain Greene will be making this Journey carrying his rescue equipment and being assisted by Veterans of the United States Navy, Army, Coast Guard, Marines, Emergency Response Officers, Fire Fighters and Law Enforcement Officers from Various areas of Harris and Galveston County. This will mark a new era in which when we think about disasters and Galveston we will also think of good thing that can reach from the Gulf of Mexico to Harris County and the City of Houston

Captain Greene will begin his trek on May , 15 2010. He will stop at various locations to promote disaster preparedness and healthy living.

Visit The IN-CERT (www.in-cert.com) page to track his progress, make a donation, or read more about getting ready for natural and man made disasters.

A Disaster Preparedness Rally will take place on May 16 at the SHAPE Our Park (3815 Live Oak) at 5:00PM.For information, you can contact the Inner-City Emergency Response Team/Department at

Man Up: I just signed up to take disaster training courses led Khallid Greene of IN-CERT. Who will join us?

This is a challenge to all men.

I first had to start with myself.

At Saviours’ Day 2010 I was assigned by The Final Call Newspaper to cover most of the workshops surrounding the increasingly important subject of disaster management, preparedness, survival, search and rescue training. One of the presenters invited by Minister Louis Farrakhan and the Saviours’ Day committee was Houston’s own Captain Khallid Greene.

He launched Houston IN-CERT (Inner-City Emergency Response Team) in 2005 during Hurricane Rita, which struck within days of Hurricane Katrina. Since that time, this brother and his team has been training hundreds for free and also saving lives with what they have been teaching. Yes, saving lives while the city of Houston was stagnant. Here is a blog I wrote about them in 2008 during Hurricane Ike to prove it. (smile)

But seriously, Bro. Khallid made a statement during his Saviours’ Day workshop that hit home with me.

“I can hardly get the brothers of the mosque or men in general to take this course and we’re suppose to be the protectors of our community. As you can see, this workshop here is even mostly filled with women. I don’t know what’s wrong with us as men. But we want to march and complain when the government doesn’t come to our rescue. We have to save ourselves,” said Bro. Khallid.

And the courses don’t cost us a penny. 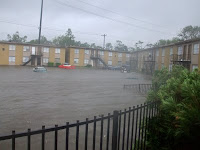 I said, “Dang, he’s talking about me bad!”. So I said to myself I must take this training when I get back home and we as men need to man up for real. We have to stop acting like this unusual global weather pattern is something “out of the blue”. The worst is yet to come. It’s written in the scriptures but even if you choose to disregard scripture ask yourself: Is my family truly prepared for when a serious calamity hits my city? Only you can answer that.

Today I got a personal call from Officer Shandenia Gay asking me if I am going to sign up for the class. I smiled because I honestly didn’t know when the next start date was but she said it starts tomorrow (March 9). I smiled and said “well I have to accept Bro. Khallid’s challenge, so count me in.”

Here is a challenge to all men in every city. Let’s man up and take these free courses in our areas. I had a near fatal experience during Hurricane Ike by running out of gas so I know personally that this training is necessary.

I will be reporting to the SHAPE Community Center on Live Oak Street tomorrow for the beginning of a four week certification, which is a total of eight classes. There’s still a few slots left in Houston but you have to sign up today. Contact Shandenia Gay at the number on the flyer below.

Blog Bonus: Here is a YouTube video I created of IN-CERT’s working during Hurricane Ike. They are community saviours.

(Blogger’s Note: Too many times I have watched major disasters occur across the country and the world wherein grassroots organizations are overlooked in the heroic efforts they make to save the lives of people. Such was the case during Hurricane Katrina when saggin’ pants wearing, undershirt sportin’, and braids having youth mobilized their neighborhoods to save thousands of people from the flooding waters. But they were not given the due recognition, only images of looting were associated with them.

Well, here is your chance to immediately get acquainted with a community group of brave well-trained residents of Houston who stepped up to the plate during Hurricane Ike and is still working as I write this blog.

IN-CERT, Inner City Emergency Response Team, is headed by Mr. Khallid Greene. IN-CERT is about readiness, people helping people, rescuer safety, and doing the greatest good for the greatest number. For years, members of churches, groups, schools, and centers have been getting training led by IN-CERT to prepare them to be first responders in situation such as Hurricane Ike….and they did!

I went one-on-one exclusively with Mr. Greene via telephone a day after his team went into action in the streets of Houston.)

Brother Jesse (BJ): When did IN-CERT hit the streets?

Khallid Greene (KG): We started assessing damage around 4:00am Saturday morning (Sept. 13) right after Hurricane Ike struck. There was a complex on North MacGregor that had four feet of flood water, so we got busy rescuing people. 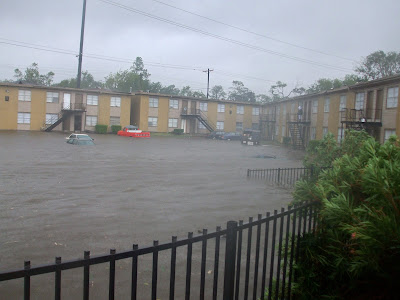 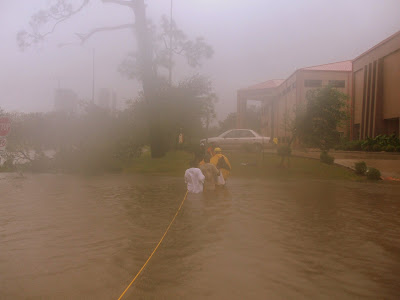 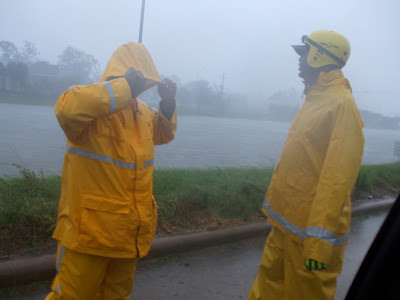 BJ: How were you all able to help people?

KG: We were able to rescue 53 people who were stranded by the flood water in Third Ward. That included new born babies in the projects. We aided many elders. Then we went to the North side of Houston to assist with directing traffic for eight hours because there were no police officers or sheriffs in sight to keep the chaos down. So we were all over the city in hard-hit areas.

BJ: Sounds like you all were deep in the trenches. What else has IN-CERT accomplished in the wake of Hurricane Ike?

KG: Yes sir we have been and are still working hard. There were two seriously damaged apartment complexes on Martin Luther King Dr with torn roofs and the people were still living in them with water falling through into their units. So we were able to contact city council and get two Metro buses which transported 146 people to the George R. Brown Convention Center. We were also able to remove debris from the power lines of a complex which caused them to be one of the first complexes to have electricity restored in the city. We have also assisted a lot of people with getting temporary housing.

BJ: Looking ahead, what do you think our communities need to do to better prepare for disasters such as Ike?

KG: We need to get a plan, back that plan and most importantly we need to implement that plan. If we do not train, organize and work our plans of action then we will continue to be at the whim of Mother Nature and these calamities. We need to build our own community infrastructure to respond to these emergency situations in all of our neighborhoods. Everyone has to step up. 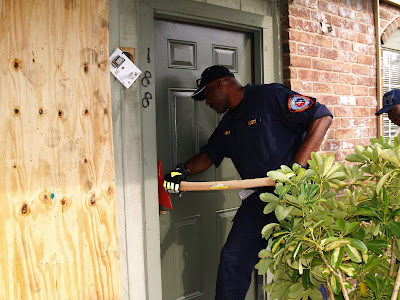 (I salute all of the members of the IN-CERT squad for putting their lives on the line and all of those grassroots organizations who tend to get overlooked. Below is a video I produced with photo highlights of IN-CERT in action!)
http://www.youtube.com/watch?v=Z7wyqi0E74Q
‘Hood Heroes of Hurricane Ike: Interview with Khallid Greene of IN-CERT was last modified: June 22nd, 2015 by BJ Blog Staff
June 22, 2015
0 Facebook Twitter Google + Pinterest