As a part of the Justice Or Else platform, the Honorable Minister Louis Farrakhan called for the establishment of conflict resolution centers in our communities in every city in America. These centers would serve as places where our people could come together and resolve their beefs in a manner that does not lead to violence.

Last week, a video from Baltimore of Pastor Jamal Bryant being confronted by PFK Boom in the streets went viral quickly. Personally, I chose not to join others in spreading it on any of my social media pages and I won’t embed the link in this article because negativity does not need any assistance in going viral. That’s a given.

However, when it comes to shining the spotlight on the reconciliation that happens by those who were once at odds, those same people who made the negative coverage go viral all of sudden can’t find the share button, the tweet button or their Facebook rostrums.

Well, if you had a hand in spreading the conflict between these two brothers, I challenge YOU to make this go viral….I dare you….

On Thursday, June 2nd, PFK Boom and Pastor Jamal Bryant had a man to man, face to face meeting to talk and come together for the one common goal: One Baltimore. In the video carried live on Periscope, they thanked Big Wolfe of 300 Gangstas for his efforts to make this happen along with Student Minister Carlos Muhammad of Muhammad Mosque No. 6 under the leadership of The Honorable Minister Louis Farrakhan. Lady Shy Heroin was also present.

“We came together today as men, saying that we had a responsibility for a whole ‘nother generation that’s coming behind us on how do you resolve your differences,” said Pastor Bryant, as PFK Boom sat to his right. “Let me say before we go forward that we do not agree on everything. We do not share the same beliefs on everything. What we do know is we are stronger together than we are separated.”

“This is for the city right here. This is a healing,” said PFK Boom. “Roads can be different but we can go down the same lane and get things done. This one’s for you Baltimore.”

Student Min. Carlos Muhammad stated, “As a student of The Honorable Minister Louis Farrakhan, I’m so happy to have a great leader that has caused me to grow and helped me to grow to get to these points where we can live and practice what we preach. The Honorable Elijah Muhammad said that our unity is more powerful than any nuclear bomb. So although we can have disagreements, we can have discords–but the greatest bullet we can shoot at Satan is when we come together in unity, peace and go for the bigger cause.”

I salute these brothers for setting a great example!

WATCH and SHARE the full video of the peace making!

BONUS: On Friday, June 3rd 2016 on Listen Up with Farajii Muhammad on 88.9 WEAA FM, he spoke with Student Minister Carlos Muhammad of Muhammad Mosque No. 6 about the recent developments of the ‪#‎PeaceMeeting‬ where Pastor Jamal Bryant of ‪#‎TheEmpowermentTemple‬, activist PFK Boom, street soldier Bro Wolfe and Lady Shy Heroin reconciled their differences. The ‪#‎StreetUnity‬ is real! Hit play to Listen Up. ‪#‎OneBaltimore‬ ‪#‎300Gangstas‬

Warning. Prepare yourself to laugh at this blog entry about by trip to Baltimore, Maryland on October 31 – November 2. I was invited by the New Light Leadership Coalition to be a workshop presenter at their 10th Annual Youth & College Summit on the campus of Morgan State University. NLLC is headed by Farajii Muhammad and I was honored by the invite.

Here is the adventure…

I was staying in a hotel Alexandria, Virginia and for those who may not be a map expert, it is only 30 minutes or so outside of D.C. but over an hour from Baltimore. So being the adventurous type I decided that I would catch the Amtrak train on Saturday morning to Baltimore that was suppose to get me there by 11am. My workshop was at 12:30pm. That turned out to be a BIG mistake!

I got on the train, stretched out in chill mode with my laptop and accidentally missed my stop in Baltimore. I didn’t notice it was my stop because the train personnel did not notify the passengers so I ran to try and catch the door but it closed in my face. I literally was upset because I was worried about not keeping my word to the NLLC. So asked one of the train staff members if they could stop the train and he told me ‘Who do you think you are?’. Then I asked him when was the next stop and he said ‘A place you really don’t want to stop in’…that place was the town of Aberdeen aka no man’s land. 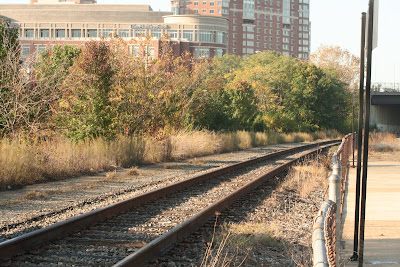 He told me I would have to catch a cab back to Baltimore being that the next train wasn’t scheduled to come back until 7pm that night…Aberdeen is nearly 40 miles from Baltimore! I called a cab company from a gas station and the cab that showed up looked like it had been hit by a train. Going a little over 50 miles per hr that cab picked me up at 11:45am and got me to Morgan State at 12:32pm! You can only imagine how much that ride would have cost me if I weren’t skilled in the art of negotiation. (smile)

I immediately went right into my back-to-back workshops entitled “Mediocrity is NOT in your D.N.A.”. I started out by first making them laugh with my Amtrak adventure, sharing parts of my life growing up in Houston and then we had some powerful interactive moments. 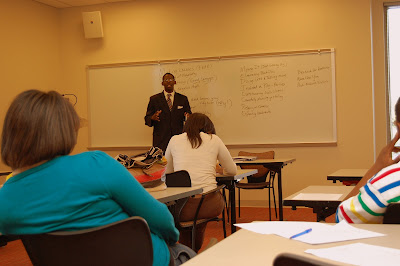 Here are some of the reactions to my workshops according to the evaluation forms:

“This by far was my favorite workshop. He is so real and engaging when he does his presentation.”

“This workshop really inspired me to follow through with my goals and do more in the next year.”

“The workshop was great. I enjoyed his energy”

“This was just what I needed to hear.”

“Brother Jesse has a powerful personal story and that really adds to the importance of this workshop.”

THIS BLOG ENTRY IS SPONSORED BY A GREAT PHOTOGRAPHER WHO SHOT MOST OF MY PHOTOS DURING MY WORKSHOP. HER NAME IS LENEE F. AND SHE IS A STUDENT AT MORGAN STATE. PLEASE VIEW HER WORK AT www.myspace.com/ventagelee or flickr.com/photos/ventagelee/