Support “Today, I Am Muslim, Too” Day

You ever imagine what it would feel like to be a Muslim in America for one day? Would you be willing to trade places with one just to see?

Republican Rep. Peter King obviously does not care what it feels like to be a Muslim as he prepares to start Congressional hearings this week on what he calls Muslim “Radicalization”. I believe it is just another tactic to bash those of the Islamic faith, place us all in the same box or label of terrorists–all in the name of protecting America from “homegrown” threats. This will only divide America even more and increase Islamophobia.

In a recent editorial on the Huffington Post, titled “The Hypocrisy of Peter King”, Hip-Hop mogul Russell Simmons wrote “…our beef with Rep. King is that while he was happy to operate within the gray areas of the IRA debate, when the conversation turned to Muslim Americans, his world view became black and white. To Rep. King, a Muslim seems to equal terrorist (or at least terrorist sympathizer), no matter what a person’s background, political leanings or actions.”

Sadly, we know that there are many who think like Rep. King when Islam is discussed. This year will not only mark the tenth anniversary of 9/11, but will also mark a decade of some of the worst and most unfair treatment of everyday Muslims in this country. I have encountered it personally. It has now come to be expected and serves as motivation to continue sharing the beauty of Islam, a religion rooted in peace.

How about you become a Muslim for a day? 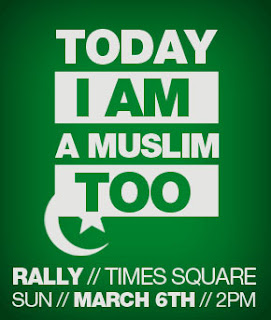 Russell Simmons and a coalition of over 75 interfaith, nonprofit, governmental, and civil liberties groups will convene on Sunday, March 6 in Times Square (42nd Street and 7th Avenue) in support of equitable civil rights for the “Today, I Am a Muslim, Too” rally. I love the idea!

According to the official press release, this rally is taking place in response to the upcoming Congressional hearings led by Rep. King and rally-goers will “stand together against bigotry caused by anxiety, misinformation, and ignorance, to show Congress a united American community which seeks to strengthen – not dilute – our bonds of friendship and trust.”

The organizers of this rally believe one can be a loyal Muslim as well as a loyal American without conflict. Many would agree and disagree about that. What do you think?

I am in support of “Today, I Am Muslim, Too” Day. Not just for March 6 but beyond the one day. This could be the launching pad for change or things may just remain the same.

Let’s do our part.

On The Yard With Professor Bun B

Can Muslims safely live and pray in America?

It’s Hard Not To Judge A Book By Its Cover

The Gift and The Curse: How will Whitney Houston be remembered?

Nation of Islam material should not be banned

Updates #1-3 In Search of My Father Series: Meeting with four out of the five daughters Earl has in Houston

Your Blacks Are So Much Better?

Does God care about what we eat?

Faith and Love: “Our first conversation was unlike anything I had imagined”

I got bullied but didn’t kill myself