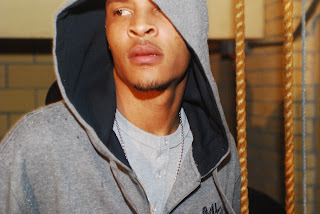 (Blogger’s Note: The following is an excerpt of a story that will appear in an upcoming edition of The Final Call Newspaper)

Whether its his MTV show Road To Redemption or speaking at schools across the country, Grammy awarding-winning artist T.I. has been working to touch the hearts and minds of young people to show them that everyone can make mistakes and also has the power to live responsibly.
â€œI use to have to walk with guns, not I got to walk with Godâ€, said T.I., who was born Clifford Harris Jr., to an audience on the campus of Texas Southern University (TSU). â€œI am a firm believer that anything that doesn’t kill me makes me a stronger person.â€

T.I. was in town for one of his last scheduled tour stops just before appearing in a federal court on March 27, where he was sentenced to one year in prison for purchasing illegal machine guns and silencers in October of 2007.

He was caught purchasing the weapons in an Atlanta parking lot, just moments before he was scheduled to perform a few blocks away at the BET Awards. One of his former bodyguards helped to set up the transaction between T.I. and an undercover agent that resulted in his arrest before being released on $3 million dollars bail.

His defense team worked out a plea deal with prosecutors, which allowed the rapper to avoid the mandated 4 plus years. He was also ordered to complete a minimum of 1,000 hours of community service and the music icon has not been just sitting by waiting for his day back in court. According to AllHipHop.com, after being set free on bail he went on to visit 25 states where he made appearances at more than 260 events, spoke at 58 schools, 12 Boys and Girls Clubs, nine churches and the Ga. Juvenile Justice.

Brother Jesse To Be a Featured Speaker at the 6th Annual International Human Rights Film Festival in New Orleans this weekend!

Farrakhan on Beyoncé & Kendrick Lamar.. “The Cultural Revolution Is On!”

Making the Connection Offline: Houston Tweet Up a big success!