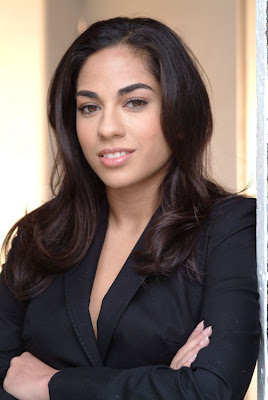 (Bloggerâ€™s Note: Sharon Carpenter is an on-air correspondent and producer for Black Entertainment Television(BET). During her fast-paced work schedule, I was able to go one-on-one with her about parts of her life journey, adventures in reporting, the state of youth, and the impact Obama has made in her home country of London, England)

Brother Jesse: So you are from London, England? How long have you lived in the United States?

Sharon Carpenter: Yes, I was born in England just outside North London. I am Indian, Italian, British and Scottish. I moved to America about 10 years ago to New York to attend college and ended up making the New York my permanent home.

Brother Jesse: What happened in your life that made you want to become a news reporter?

Sharon Carpenter: Honestly at first I wanted to have my own record label so I did an internship for a small independent record label while in school. But then I discovered that wasnâ€™t quite what I wanted to do. It can be difficult to find out what you want to do in life but I knew I didnâ€™t want the regular nine-five job. I wanted something with excitement and meaning.

There was a public access video show shown in the five boroughs in New York and while I was still in school the producer asked me if I’d be interested in hosting the show. I didnâ€™t know if I would be a good host but I just went for it. It went well. As I started doing it more and more I got commended for my interviews. I realized I was quite good at this. Through the show I met a person who became a mentor that changed my life. This is why I think mentors are so important for young people. He was the news director of UPN 9 in New York. He taught me a lot and made me realize that news was what I wanted to do. I became an associate producer and that was my first job in news.
Brother Jesse: When one is in search of purpose do you think we miss the hints in life that tells us â€œthis is what you are meant to be doingâ€?

Sharon Carpenter: Well, I think it is great to experience things. When the right thing comes along I donâ€™t think you will miss the hint. Experience as much as you can. Sometimes people donâ€™t know what options are out there. Thatâ€™s why staying in high school and going to college is so important. You are taught all of types of subjects which can help you figure out what you like.

Brother Jesse: What are some of the most intriguing experiences you have had as a news reporter?

Sharon Carpenter: Wow, there are so many. But a few that come to mind including BETâ€™s 106 and Park premiere of the latest Indiana Jones movie. I interviewed Harrison Ford! Iâ€™m a big fan of his so that was a great moment for me personally.

On a more serious note, after Hurricane Katrina hit I went out to Mississippi for a week to visit with rapper David Banner, whoâ€™s from Jackson. He showed us the terrible devastation and we got to figure out how much help was desperately needed for the people and the area. The story was used for a BET telethon where we were able to raise $14 million for the Red Cross.
Also I did a very important piece on the gun culture that is associated with a certain type of music in the United Kingdomcalled Grime. Grime artists in the UK are being stifled because of the violence associated with the scene and the lyrics but it is a shame that this unique flavor of music is always given such a bad rap when it’s such a fresh and innovative sound and some of it is actually very positive.

Brother Jesse: What are some of the greatest challenges young people face today from your perspective?

Sharon Carpenter: One thing is the gang culture within America as well on the international level. With the breakdown of the family unit many young people have felt acceptance from gangs as well as being pressured to join them. If you are apart of a gang then more than likely you are headed down the wrong road.

STDs are affecting young people at an alarming rate. HIV/AIDS is the leading cause of death amongst African-American women between 25-44 yrs of age. So we need to make sure young people are protecting themselves. A lot of young people I have found in my reporting are being fed the wrong information when it comes to safe sex. Also, young people are bombarded with sexual images everyday and so many young girls try to live up to the images seen in music videos

A lot of young people experience mental health issues. The New York City Dept of Health did a survey of some high school students and 8 percent said they have tried to commit suicide in the past year. 30 percent of them have been depressed enough for it to get in the way of daily activities and approximately one-third donâ€™t talk about it.

Brother Jesse: What are your thoughts about this year’s Presidential race? What did you see as a journalist that you have not seen before in the political realm?

Sharon Carpenter: Covering the news couldn’t get more exciting than it did during this year’s presidential race. Election Day 2008 was surely the most monumental event I’ll experience in my lifetime. Just 4 decades ago, there was a struggle to get the Voting Rights Act passed. Just months ago many people still didn’t think they’d live to see a Black president in the White House, but on November 4th Barack Obama scored one of the most significant victories ever and shattered racial barriers in America and across the world.

African Americans and youth especially, were energized by Barack Obama’s candidacy. During the race, one of the things that really stood out to me was the record numbers of young people who took a real interest in what was going on and made sure that their voices were heard. Many of them had never cared about politics in the past. But there was something different about this politician that drew them too him. They believed in his message of hope and change, something that people have been desperate for, especially during this time of war and financial crisis.
Brother Jesse: What were your personal feelings about the victory of President-Elect Barack Obama?

Sharon Carpenter: BET News did over 4 hours of live coverage on Election Day. I was reporting from Phoenix Arizona, at John McCain’s headquarters and my job, of course, was to communicate the mood in the room each step along the way, what supporters had to say, and to give updates on McCain’s campaign. I was ensconced in Republican-land, so when Barack Obama won, the gravity of the situation really didn’t have a chance to sink in until I went back to my hotel that night and watched TV.

Hearing him being referred to as President-Elect Obama was an overwhelmingly emotional moment for me. I dealt with racial discrimination on an everyday basis as a kid and a teenager so to see a person of color break down America’s racial barriers, to see the ecstatic looks amongst the throngs of cheering crowds, all over the nation and the world, to see how his victory brought happiness and hope to so many who put their hearts behind him, brought me to tears.
Brother Jesse: What has been the response in your home country?

Sharon Carpenter: Children, teens and adults alike, of all colors, now have proof that they can achieve anything they put their minds to, even the highest office. Black youth who in the past may have looked up to rappers or sports stars as their role models can now take a look at the President and say, “I too can be where he is.” Youth all over the globe in fact, including my home country, are greatly inspired and uplifted by Obama’s win. This country that has had a long, painful history of racial oppression; slavery, discrimination, and humiliation has now elected a Black man to be President showing just how far we’ve come. It’s the beginning of a new era.

Brother Jesse: What personal responsibility do you think communities have as it relates to the new President-Elect?

Sharon Carpenter: Obama has asked everybody to play a role in making this country a better place. We must all accept personal responsibility and do what we can to help him and help move America in a better direction.

How Does a Humble Person Act? Let’s See…

The Work Habits of The Prophets (Part 3): “The Willingness to Sacrifice to Achieve Success”