MALCOLM X IS BIGGER THAN A T-SHIRT OR RAP VERSE 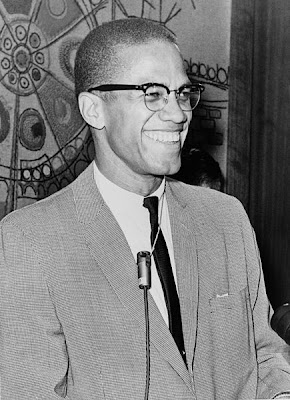 by Jesse Muhammad for GlobalGrind.com

Today many around the world are honoring the birth anniversary of Brother Malcolm X, also known as El-Hajj Malik El-Shabazz. Even the government that hated and plotted on his life made commemorative stamps years ago and corporate America has even commercialized his legacy.

I first read a book about Malcolm X as a freshman in high school titled Malcolm X on Afro-American History. It is a collection of many of the speeches he had delivered.

I learned a lot from that book and it was one of the first times in my life that I had read about the true and rich history of Black people before we were made into slaves. This was something I was not being taught in my history classes. I was blown away and shared the book with many of my classmates! They read it gladly.

Then the movie Malcolm X came out in theatres and soon all of my friends started wearing â€˜Xâ€™ shirts, hats, bracelets, handbags, etc. They felt they were “down with the cause”, “revolutionary” and “conscious” because they paid their money to see the movie.

Also many hip-hop artists started using his messages in their albums but my classmates were only moved by the beat and not by his words. Not like when Public Enemy or Poor Righteous Teachers used his words to move the masses to actionâ€¦.my friends used Malcolm X as the latest fad.

To read the full article and comment click: MALCOLM X IS BIGGER THAN A T-SHIRT OR RAP VERSE

Encouraging youth to read more books and learn about themselves

In Pills We Trust: Are Doctors Helping You Or Hooking You?

Was Houston Mayor Bill White Wrong For this Ad? What do you think?

Some Relationship Essentials (Part 2): Who wrote the ownerâ€™s manual for the institution of marriage?

Behind the #FTA100 Awards Ceremony: How It All Began – The Exclusive with Brother Jesse Muhammad & Mosque Flow

Is Sugar Impacting Your Mood?

Youtube’s Unjust Termination of Brother Ben X and NFA on the Way!

CHILDREN OF THE MOST HIGH: Who Can Find a Virtuous Wife?

Video: “Children of the Most High” 2019 Book Tour Recap

CHILDREN OF THE MOST HIGH: Be What You Want Them to Be