by Jesse MuhammadHouston, Texasâ€”It has been thirty-three years since the death penalty was reinstated in the United States and the state of Texas has killed more people by lethal injection than any other state in the country. Reginald Blanton, a convicted Black man, became the latest life snuffed out.

According to an Amnesty International report, over 1,100 people have been executed in the U.S. since 1976. Eighty percent of all executions have taken place in the South, with Texas accounting for 37% of the executions. Out of the eleven remaining scheduled executions for this year, six are set to take place in Texas.

In Huntsville, 28-year-old Mr. Blanton was executed on October 27 in connection with the murder of Carlos Garza nine years ago.

As Mr. Blanton laid strapped to the death-chamber gurney, he uttered these words in part â€œâ€¦what is happening right now is an injustice. This doesn’t solve anything. This will not bring back Carlos. Ya’ll fought real hard here to prove my innocence. This is only the beginning.â€

Three days before Mr. Blanton was executed, his tearful mother Anna Terrell spoke firm before a crowd of over 500 people on Oct. 24 in Austin during the 10th Annual March to Abolish the Death Penalty.

â€œIt is hard to speak of the pain that I feel. This is my son, my life, my blessing,â€ said Ms. Terrell.

â€œAnd I have strange people, who do not even know who my son is, wanting to kill him. It is true, that if you have deep pockets you can buy justice,â€ she said.

Ms. Terrell further noted that her son never stopped writing about his innocence and his first lawyers â€œnever filed any of his pleas. â€œRick Perry is sitting on his ivory chair. Youâ€™re going to pay for what you have done. Youâ€™re not going to get away with this. Little by little God is bringing you out for people to see who you really are. You are evil.â€

â€œIn Texas, it is better to be rich and guilty, than it is to be poor and innocent,â€ says Nation of Islam student minister Robert Muhammad. (pictured below) 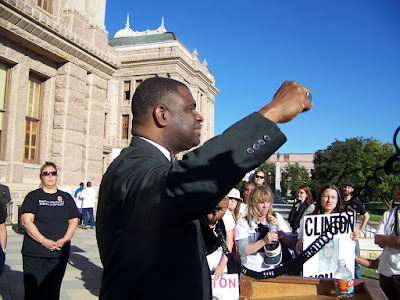 â€œI am so angry right now. Having to stand outside the death house with these families is hard,â€ says Gloria Rubac, long-time activist in opposition to the death penalty.

â€œYou would think after information coming out about the Willingham case, these executions would cease, but Reggie [Blanton] was another victim of a legal lynching,â€ says Ms. Rubac.

Reginald Clemons’ next court hearing set for May 23

‘Tis NOT the Season! Minister Farrakhan calls for another Black Friday & Christmas boycott

“Guidance in A Time of Trouble”- Pt 2 by Student Min. Ishmael Muhammad