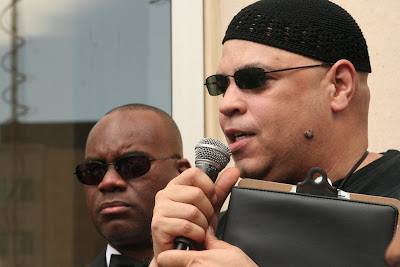 Chairman Taharka replaces Dr.Conrad Worrill who is a founding member and has served as Chairman for over two decades.

NBUF is a grassroots human rights and social justice organization.

â€œWe are facing many challenges and opportunities as a people, I am looking forward to working with the new leadership to serve the communityâ€ said Taharka. The new Chairman comes from the Houston Chapter of NBUF and is a native of S.E. Banneker City (Washington D.C.).

A young organizer out of New Jersey, Salim Adofo was elected as the new Vice-Chair of Organizing and Training replacing author and movement veteran Dr. Oba Tâ€™Shaka. Toriano Granger of Chicago and Sandra Dean of Kansas City retained their elected positions.

Racial tension flares in Paris, Texas during rally over the dragging death of Brandon McClelland

“Guidance in A Time of Trouble”- Pt 2 by Student Min. Ishmael Muhammad

7-Year-Old Aiyana Jones Shot by Police in Her Sleep. Why?

We Make the World Better: All Real Radio Campaign Kick-Off At Radical Eats in Houston

Don’t Forget: White vigilantes shot at Blacks on sight…..what can you do about it?

Farrakhan coming to Winston-Salem in May