Home Perspective Is there a subtle message in this New York Post cartoon?
Perspective

Is there a subtle message in this New York Post cartoon?

This morning a community activist sent me an email with the subject title “What you say about my president?”. I opened it and she was going off about a reportedly offensive cartoon that is published in today’s New York Post. I clicked the link she sent me and below is the image I saw on the website of the National Action Network.

The cartoon is said to be referring to Travis the chimp, who was killed by police in Connecticut this past Monday after it attacked one of the friends of its owner. But some people see it as a racial attack on President Obama. What do you think? 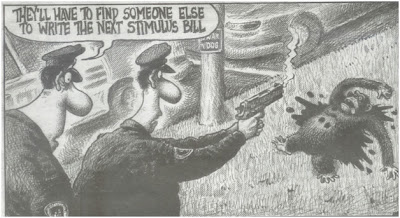 Rev. Al Sharpton weighed in on the cartoon and stated:

“The cartoon in todayâ€™s New York Post is troubling at best, given the racist attacks throughout history that have made African-Americans synonymous with monkeys.”

“Being that the stimulus bill has been the first legislative victory of President Barack Obama (the first African American president) and has become synonymous with him it is not a reach to wonder whether the Post cartoonist was inferring that a monkey wrote it? Given that the New York Post cartoonist has come under heavy fire in the past for racially tinged cartoons including the infamous cartoons depicting 2001 mayoral candidate Freddy Ferrer and me in very unflattering ways (that ultimately was used as a campaign tactic to inflame racial prejudices), one cannot ignore that history when looking at this morningâ€™s cartoon. “

“The Post should at least clarify what point they were trying to make in this cartoon, and reprimand their cartoonist for making inferences that are offensive and divisive at a time the nation struggles to come together to stabilize the economy if, in fact, this was yet another racially charged cartoon.”

NY Gov. David Paterson told a CBS reporter, “It would be very important for the New York Post to explain what the cartoon was intended to portray.”

What are your thoughts on this?

Do you see it as offensive?

Is it a racial attack on the President?

Or is it just a harmless cartoon meant to be funny?

The Death of the Black Activist Athlete

CHILDREN OF THE MOST HIGH: A Girl Child Ain’t Safe in a Family of Men

A Response to Mr. Peter Smith’s article in The Courier-Journal on Muhammad Ali