‘We only do projects that speak to us’

Twin brothers Allen and Albert Hughes, the dynamic directing duo known as The Hughes Brothers, made a major leap into the entertainment industry with their emotionally gripping debut as the 20-year-old creators/directors of â€œMenace II Society.â€

The film generated national and international critical acclaim. With a budget of roughly $3 million, they took a story that they came up with at age 14 and turned it into a motion picture that grossed nearly $30 million at the box-office.

They followed up with â€œDead Presidents,â€ a fascinating story of a young man’s life which turns to shambles after he is sent to war in Vietnam. Expecting to return home as a hero, the young man instead finds himself reduced to pulling off an armored car robbery in order to support his family.

After a break from the business for several years, they returned with the riveting motion picture â€œThe Book of Eliâ€ starring award winning actor Denzel Washington.


With the assistance and coordination of Brother Don Enoch Muhammad, Allen Hughes, who is scheduled to be a part of this year’s Saviours’ Day 2010 convention, took time from his busy schedule to speak with The Final Call’s Assistant Editor Ashahed M. Muhammad.

Ashahed M. Muhammad (The Final Call:) How do you determine which scripts you will direct and which projects you turn down?

Allen Hughes (AH:) I think one area that makes me and my brother different from most filmmakers is we only do the projects that speak to us; that speak to our soul and that we feel like can make a difference or can speak to others. That is first. Second, we start looking at the key players involved. If we feel that somebody is morally or spiritually bankrupt, then we won’t get involved in the project either. It’s a combination of things. And, who is attached to the project, the studio, producer, the stars, and whether all those people are good people. 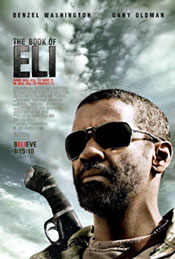 (FC:) Your recent film, â€œThe Book of Eliâ€, generated a lot of buzz and good reviews. I’ve found it to be a daily conversation starter usually ending up in a spiritual discussion which then turns into an artistic discussion which then turns into a â€œmeaning of life discussion.â€ In the movie, you showed the Bible, the Holy Qur’an, the Torah and many other books of scripture. Sometimes religion can be a real volatile issue. Were you all concerned that it might alienate some of the people? Or did you feel like some others, maybe Christians, would kind of embrace it and take it and kind of make it like it was a Christian movie to the exclusion of others who might not be Christians?

(AH:) I think we were very concerned about that. The most important thing was that (we wanted) it speak to everybodyâ€”Muslims, Christians, Native Americans, Buddhist, Hindu’s. I call it a oneness.

Saviours’ Day 2010: ‘I Am Woman’ workshop to help women awaken their Spirit of Excellence and Virtue

The Final Call Chronicles: Delivering A Recliner To A Community Elder!

CHILDREN OF THE MOST HIGH: Father’s Influence on Pregnancy

CHILDREN OF THE MOST HIGH: Man(kind)’s Best Friend