I got bullied but didn’t kill myself

I am honestly trying to wrap my mind around why bullying leading to suicides has become the “in thing” since children have been bullying one another for decades.

Unemotionally and humbly I can’t help but ask is bullying really an excuse to take your life?

I was a serious victim of bullying and teasing when I attended Fondren Middle School in Southwest Houston. I was extremely skinny, lanky, and dark so I was an easy target for jokes and pranks.

Just about every morning in 6th grade, during school breakfast, I found myself being picked on by four male students. At first I brushed it off as harmless until they started dumping me in one of the steel trashcans in front of the entire school. It happened so frequently it became a routine laugh at breakfast for classmates and it would be talked about throughout the day.

I was embarrassed and wanted to physically fight them but my small frame was no match for their size. I suffered in silence. I never told a teacher for fear of being called a snitch. I avoided them and others whenever I could.

At that time we stayed in the crime-ridden apartment complex literally right behind the school. I kissed my mother goodbye every morning, never telling her what was going on. I gave her no signals because I always kept a smile. However, I would start purposely walking slower than ever to school to arrive just before and right after the bell for first period class just to avoid the humiliation. The boys eventually started calling me a coward because they knew I was avoiding them.

They were right, I felt like a coward inside.

In my mind I had another strike against me–my dark skin. I was one of the top students in all of my classes but I found myself constantly being picked upon by lighter skin students about my skin color. I wasn’t good at playing the dozens and never had a comeback line so I would just have to sit and listen to them make mockery of my skin, my ears, my boniness, and the dark circles around my eyes that resembled women’s eyeliner. 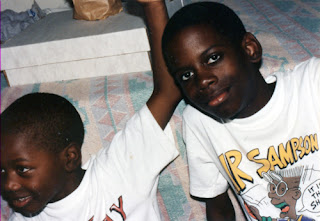 My mother wasn’t rich so I didn’t have the latest Polo shirts or Air Jordan’s. Yet, we were just excited to receive matching sets for the new school year and during Christmas. These sets came from the former local Weiner’s Clothing Store which was considered the place for the “broke folks” by my classmate’s standards.

There I was–being placed in a trashcan, being teased about my dark skin and rocking substandard clothing. I hated all three, my dark skin the most.

I remember feeling a burst of confidence at that time when one of my elder brothers sent me a pair of Air Jordan’s from Japan. He was stationed there as a soldier in the Marines. I found out in his letter that he only had to pay $35 for them across seas but I would not tell that to my classmates because this was my chance to feel a part of the crowd. Prior to that I had XJ-900s, imitation Jordan’s sold at Payless Shoes, another so-called “broke folks” spot.

It worked for a while until they realized I was still wearing Weiner’s outfits with Air Jordan’s. “Man you disrespecting the Jordan’s,” they would say.

I was back at square one.

Hating myself, my clothes, those Jordan’s and hating that school. I kept it to myself. Oh yeah, my name was Jesse Jackson so that brought unwarranted attention as well and a chorus of “keep hope alive” in a teasing manner.

I wanted a way out of the spider web of my own thinking but suicide never entered my mind.

Instead I focused on being a greater student winning awards. I joined the basketball team and found a mentor in Coach Miller. He became like a father to me in the absence of my biological one. He didn’t know it but his fearless attitude about life rubbed off on me and made me toughen up. He forced me to run track and I became fast. He developed me into a good basketball player. 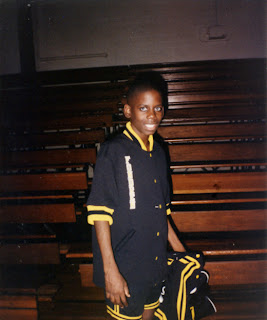 I then joined the band and played the snare drum while singing in the choir. I performed in talent shows with my best friend Quincy. I became a popular student and I saw that I was beating down the naysayers and bullies with excellence. I was no longer being teased but there was one problem…..I was still uncomfortable with my dark skin.

It took me a long time to learn to love my Black skin and appreciate how God made me. I know I’m not alone in this because there are others who hate theirs and they are trying so hard every day to look like someone else.

So if you’re being bullied or teased right now and keeping it to yourself, I give you these words from Houston 9th grader Ayinde Muhammad

“You have your whole world ahead of you. When you commit suicide, your world is gone and the bully is left alive. Nobody is worth you taking your life. Too much to live for.”

Everyone’s life or circumstances is not the same but all life is about overcoming difficulties. Don’t buckle under the pressure young people.

I got bullied but didn’t kill myself was last modified: July 22nd, 2015 by BJ Blog Staff
bullyingchildrencyber bullying

Jesus is no match for Santa

Harlem March: Is Farrakhan paid off to defend Gadhafi?

Execution date set for Troy Davis. Too Much Doubt…

Dr. King: More Than A Dreamer

The American Dream Has Become A Nightmare?!

What if the Tea Party was Black?

Weighing in on Malcolm X: Do we really know him?