Home Motivation I Am M.E.D.I.A. workshop kicks off at The Elevated Places
MotivationYouth

I Am M.E.D.I.A. workshop kicks off at The Elevated Places

I had the honor of kicking off a workshop series in November for students at The Elevated Places school located in Missouri City, Texas. I will be conducting it the first and last Wednesday of every month until the end of the 2008-2009 school year.

The title of this workshop series is I AM M.E.D.I.A. : The Art of Reporting & Photojournalism. The professors wanted me to teach them how to write stories, conduct interviews, take photographs, and more.The word MEDIA here is an acronym for Meaning, Exceptional, Dimensional, Investigative and Adventurous.

I first talked to them about some of the interesting stories I have covered for The Final Call Newspaper as well as the journalistic skills I have learned from past and present FCN officials such as Dora Muhammad, Richard Muhammad, Askia Muhammad and Ashahed Muhammad. The students first assignment was to developed the draft of their soon to be Spring release of The Elevated Places Magazine.

I then let them take a few photos with my Canon for fun.

Here is one shot by one of the students. 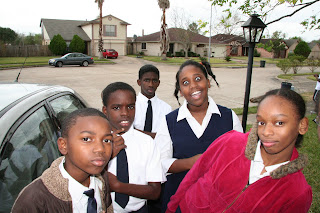 A New Generation of Leadership: State of the Black World Reporting Part 3

How Does a Humble Person Act? Let’s See…

Houston students inspired by speaker to change their attitude, love self and compete to be the best.

Reginald Gordon of Operation Outreach OG1: Refuses to Give Up on Black Youth

It Is All Good–Every Last Bit of It!

CHILDREN OF THE MOST HIGH: 10-Point Birth Plan