Home Motivation End of the Year One-on-One with Filmmaker Stacey Muhammad: “Out of Our Right Minds – Trauma, Depression and the Black Woman”
Motivation

End of the Year One-on-One with Filmmaker Stacey Muhammad: “Out of Our Right Minds – Trauma, Depression and the Black Woman”

Brother Jesse: The first time I interviewed you for my blog, you had just released the “I AM SEAN BELL, Black Boys Speak” documentary. I loved it! What has been the national response? Any awards? Are you planning to do a Part 2?

Stacey Muhammad: The response to the I AM SEAN BELL documentary has been overwhelmingly positive and beyond anything Iâ€™d imagined. The documentary has been screened at film festivals nationwide. Oftentimes, the kids in the film have accompanied me to the screenings and they are always met with a tremendous amount of love and admiration from the audience.

We won the Short Film of the Year Award at the 12th Annual Reel Sisters of the Diaspora Film Festival & Lecture Series here in NYC. Iâ€™m extremely honored to have received this award and recognition for this work, all in honor of our brother, Sean Bell. Not sure about a part two at this time.

Brother Jesse: This year you and Hip-Hop legend Wise Intelligent joined forces to launch a program called Intelligent Seedz to teach youth filmmaking skills. What impact has it had on the youth of New Jersey? What has been accomplished thus far?

Stacey Muhammad: Iâ€™m especially excited and proud of the work Wise and I have done with Intelligent Seedz. We started the program this year and have really been blessed to do a lot in a very short period of time.

Thus far, weâ€™ve been working with six young people in the New Jersey area who are learning all aspects of filmmaking, editing and music video production; as well as graphic and web design skills. The children started production on their first short documentary film, Dying to Learn, which addresses the high levels of lead in the water in Trenton, NJ public schools. They also shot and edited a music video for a song by the Pazzion Girlz, from the soundtrack of the Dying to Learn Film. Most recently, they won third place in a national lead prevention video contest sponsored by the Environmental Protection Agency and the Center for Disease Control. Right now, weâ€™re completing the documentary film and preparing for the release of our magazine publication, which the children will also produce.

I think that the impact has been enormous, in that young people are being empowered to tell their stories, while being equipped with the necessary skills to do so. They get an opportunity to tell the world about the environment in which they are embedded and what itâ€™s producing in their lives, and I believe that people are listening.

Brother Jesse: I recently got tagged on Facebook about your soon to be released film titled “Out of Our Right Minds – Trauma, Depression and the Black Woman”. The trailer is deep. What inspired the making of this film? What do you want to accomplish with this one? When will it premiere?

Stacey Muhammad: Iâ€™ve been studying Post Traumatic Slave Syndrome and the writings of Dr. Joy Leary as well as books like â€œRock My Soul, Black People and Self Esteemâ€ by Professor Bell Hooks for quite some time and have long believed that the traumas Black people experienced in slavery were directly related to, and actually responsible for many of the psychosis, depressions and mental disorders we deal with today.

However, nothing could prepare me for this subject more than my own personal experience with depression a few years ago. Although it was short-lived, it was quickly debilitating and I knew that if my life were to ever get back on track I needed to figure out what was going on with me and with so many other brothers and sisters who were suffering in silence. What I learned during this time is that Black folks really donâ€™t talk about depression and mental illness nearly as much as we need to. Black women often feel that weâ€™ve endured so much that a diagnosis of depression isnâ€™t something else we can add to our plate. But, itâ€™s real and sisters are hurting and suffering and living unfulfilled lives for a myriad of reasons.

So, this film explores whatâ€™s happening in the minds and in the hearts of Black women.

However, weâ€™ll also be looking at the sickness that is White Supremacy, the trauma of the middle passage and our enslaved years here in America. We cannot discuss the lives of Black people without discussing how being embedded in an environment that is in total contradiction to everything that we are, as Black people, has literally driven us to insanity.

Of course weâ€™ll also be exploring Black male / female relationships and the reality that Black male emasculation and the suppression of Black women in a White-male-supremacist patriarchal system is at the root of many of the problems between Black men and women. Itâ€™s a heavy topic that cannot be adequately addressed in one short film. Suffice it to say, this is just part one in a series of films on healing the black family.

What Iâ€™d like to accomplish with this film as with all of my work, is to create an opening and a space for healing. The film will premiere, God-willing at Saviourâ€™s Day, February 2010!

Brother Jesse: On Blueprint 3 Jay-Z says, “Yall should be afraid of what I’m gon’ do next”. (smile) Undoubtedly we have watched you make some serious waves in 2009. What’s in store for Stacey Muhammad in 2010 and even 2011?

Stacey Muhammad: J, I think I mentioned in the last interview that I feel extremely blessed to be doing what I believe I was put here to do. So, for 2010 and beyond, itâ€™s just about making myself available to spirit in the most sincere and influential way, to continue to be a vessel for this workâ€¦living, loving, learning, growing, creating, thatâ€™s all I really want to do. 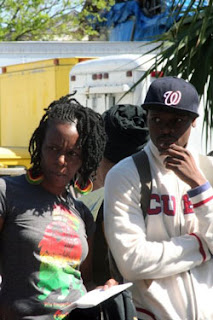 2010 marks the launch of the Intelligent Media / Wildseed Films brand, under which Wiseâ€™s company Intelligent Media and my company, Wildseed Films will merge to create some very important content, online series, short films, music videos and much more. So stay tuned to our websites @ www.wildseedstudios.com and www.intelligentmuzik.com for more info on that.

Special shout out to the kids of Intelligent Seedz. Check us out online www.intelligentseedz.org. And a very special dedication to my beloved friend, Ron Davis who transitioned this past week. If it were not for him, I would not be where I am today. Love you dearly.

Thank you to everyone for their support this past year.

Brother Jesse: Thank you Stacey and much continued success to you in 2010.

Protecting Yourself from Prostate Cancer

No Second Chances? Tiger Woods, Serena Williams and Michael Vick on the latest cover of The Final Call newspaper

4 Ways to Work Smarter and Manage Your Time More Effectively

CHILDREN OF THE MOST HIGH: God – Family – Nation

In the Eye of a Needle: Black nanotechnologist Willard Wigan comes to Houston

Minister Farrakhan: “We are going to get through the dark hour.”

Need a Speaker at Your School? Read these Testimonies from Tulane Law Students and others on Brother Jesse

5 Ways To Overcome Your Fear of Public Speaking

Reginald Gordon, Brother Jesse, and Durce Muhammad to speak at Hope Academy in Houston on November 12