Home Top News Don’t Forget: White vigilantes shot at Blacks on sight…..what can you do about it?
Top News

Don’t Forget: White vigilantes shot at Blacks on sight…..what can you do about it?

I know some of you all keep saying to yourself “Just let it go.”

Sorry, it is not going to happen because there is still an army of individual who will not let up in the fight for justice. And newspapers like The Final Call will not stop keeping these stories at the forefront of our minds and neither will this blog.

If you have been keeping up with the news the last several months, you know that the city of New Orleans has become a “second home” for the Federal Bureau of Investigations (FBI) because of resurfacing crimes committed in the wake of Hurricane Katrina. According to an email I received from Nation of Islam Student Minister Willie Muhammad, there are several federal investigations taking place in the city of New Orleans right now.

“Many of them are dealing with the criminal activities of members of the New Orleans Police Department and the vigilante shooting of Donnell Herrington. The information that has been released to the public as a result of the investigations clearly show that criminal acts took place. However, we have not heard anything from the local District Attorney’s office about what it will do as it relates with charging these individuals or what it is doing right now. We deserve to know,” stated Brother Willie in the email.

After I read an 18-month investigation by The Nation magazine about the plight of Mr. Herrington, I interviewed him one-on-one for a story I did that was published in The Final Call January 2009. His story was serious and can not be forgotten along with other victims at the hands of White vigilantes and the New Orleans Police Department. Here is the link to that story: Demands for probe of White vigilante shootings in New Orleans enclave growing 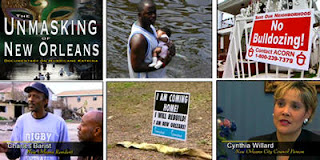 So what can you do?

Bro. Willie is asking that “everyone who receives this email to just take a moment to forward what is written below to the following email address Emurphy@orleansda.com . Do so after you have typed in the date you emailed it and type your name. Please send this even if you are not a citizen of New Orleans. This will not take more than five minutes.”

I am sending mines off right now! Will you join us? Here is the letter that you can copy and paste.

I am greatly disturbed by the revelations of the criminal behavior of some members of the New Orleans Police Department days after Hurricane Katrina. The information that is being made public due to federal investigations are showing that criminal acts were committed against the Madison family at the Danziger Bridge and in the death of Henry Glover. In addition to those investigations we have also been informed through media reports that the federal government is also investigating the shooting of the young man in Algiers. In light of all of this we have not heard anything from your office regarding what actions it will take. Thus I have the following questions:

1) Why have these officers and the man who shot Donnell Herrington not been charged?

2)As it relates to the officers who have been charged, why are they free and not in jail since this is a capital murder case?

3)Why has Mr. William Tanner, who last saw Henry Glover with members of the New Orleans Police Department not been contacted by your office?

Photos: Houston Grassroots Efforts in the Wake of Hurricane Harvey

On the cover of Hurt 2 Healing magazine: “How I became a man in the absence of my father”

Farrakhan sends message to President-elect Trump: ‘Push it so good that Black people say “I’m out of here, I can’t take it no more.”‘