Home Perspective Do you see anything wrong with these signs?
Perspective

I first received a message on Facebook from Paradise Gray about the marquee of the company Pecora Flooring in the Pittsburgh area. He was asking us all to put in a call to the store to express our displeasure with some reportedly racist words. I went to Twitter to the page of Jasiri X because I knew he would have the picture posted. And I was correct. Above is a snapshot of the marquee taken on November 8, 2009 and posted on Twitpic at http://twitpic.com/ooug7.

The headline reads: “zoo has african lion, white house has a lyin african“. This is obviously an attack on President Barack Obama.

Paradise Gray and Jasiri X posted the number to the company online. I called around 8pm cst and as expected the voicemail was full. Guess the Twitter army moved in on them like Joe Wilson.

But wait…..this wasn’t the first time this type of sign was spotted. Check out this protester below at a rally. 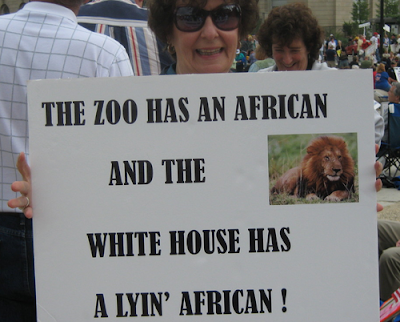 Some people feel like it’s a waste of blog space to post these things but I disagree. The uninformed masses need to be informed. Those who think we’re in a post-racial America need to wake up. Those of us who care to, should follow the advice of the Honorable Minister Louis Farrakhan and keep Pres. Obama and his family in your prayers.Those who want to respond to this marquee, let’s accept responsibility to build our own community. The honeymoon is over. The time is now!
Do you see anything wrong with these signs? was last modified: July 16th, 2015 by BJ Blog Staff
President Barack Obamaracismwhite supremacy

“Beware Young Girl”: The disturbing trend of horrific violence and injustice towards women

“On the Hill” with Akilah

Aiyana Jones: Tomorrow it could be your child

CHILDREN OF THE MOST HIGH: Cain and Abel had the Same Mother

Getting to Know the Nation of Islam Series: #FarrakhanTwitterArmy

12 Things Toxic People Do and How To Deal With Them

A Muslim Perspective on Love