Home Read-A-Holics Do you read The Final Call Newspaper? Did you know there is now a UK/International edition?
Read-A-Holics

Do you read The Final Call Newspaper? Did you know there is now a UK/International edition?

When was the last time you picked up a copy of The Final Call Newspaper? The men of the Nation of Islam, called The Fruit of Islam, can be found on street corners of your city offering this wonderful newspaper. It’s not about $1.00. It’s about what’s inside.

In this latest edition, this is what you will find in part:

Farrakhan: America’s time is up by Ashahed M. Muhammad

The Honorable Minister Louis Farrakhan delivered Part II of the historic lecture series titled â€œThe Time and What Must Be Doneâ€ from the Nation of Islam’s national headquarters, Mosque Maryam on Nov.29. Click here to read the full article: Farrakhan: America’s time is up

Â
Â
Developing a Christ Consciousness In You by the Honorable Minister Louis Farrakhan
When Jesus was among us, his mission had a time limit. He knew the season; he knew the time that he would no longer be among the people, so all during his ministry, he was preparing those who would carry on his work after he was gone. Sometimes, when a great one has been and is among us, we get addicted to a personality, and that can become dangerous in a sense because then we form sometimes what is called a personality cult. Click here to read the full article: Developing a Christ Consciousness In YouÂ
What the case of Sammy Sosa says to both Blacks and Latinos by David J. Muhammad

Sammy Sosa’s recent public appearance at the Latin Grammys, revealing his significantly lighter complexion along with green contacts and permed hair has caused uproar within the Black and Latino community. It’s tempting for U.S. commentators to blame â€œDominican Racismâ€ for this scandal and likewise attraction for the Latin American media to mock Sosa for his new appearance. These responses are more of a smokescreen covering a much deeper issue than the Sosa incident itself. Click here to read the full article: What the case of Sammy Sosa says to both Blacks and Latinos

Wait there is more!

The Final Call Newspaper has a UK/International Edition that is published weekly and shipped across seas. See the recent cover below and the headline story. 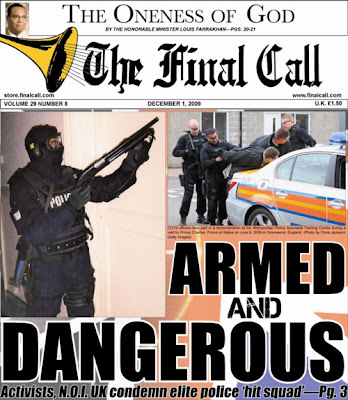 Do you read The Final Call Newspaper? Did you know there is now a UK/International edition? was last modified: July 20th, 2015 by BJ Blog Staff
Christconsciousfinal call UKHonorable Minister Louis Farrakhanthe final call

Pause: Today I remember George Thomas “Mickey” Leland…my grandmother introduced me to him.

The Final Call Newspaper: One year after election, Obama presidency under seige

People Who Read Books Live Longer, According To Science

The Importance of Study (Part 5): Five Simple Study Methods YOU Can EASILY Use!

The Passing Of A Prince

No Second Chances? Tiger Woods, Serena Williams and Michael Vick on the latest cover of The Final Call newspaper