Sister Latonia Muhammad of Muhammad Mosque No. 45 performs poetry during the 2009 Pre-Saviours’ Day Celebration in Houston on February 21st.

Getting to Know the Believers of the Nation of Islam 2009 Series is the brainchild of the Muhammad Mosque No. 45 Ministry of Information. The purpose of this series is to familiarize the world with the brilliance and talent that is within the ranks of the NOI under the leadership of the Honorable Minister Louis Farrakhan. 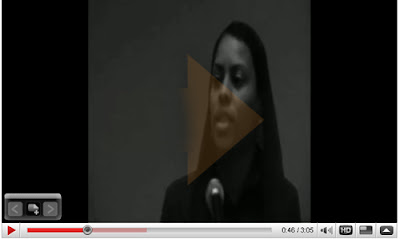 Al-Nisa Designs, by Carmin Muhammad, to be featured in Torino Fashion Week (Italy)

The Final Call Chronicles: Despite the Rain, Allah Had Other Plans for Us

CHILDREN OF THE MOST HIGH: The Divine Value of Mother’s Milk

CHILDREN OF THE MOST HIGH: Killing the Fruit of the Womb – Part 1 of 2

CHILDREN OF THE MOST HIGH: The National Anthem and Our Youth