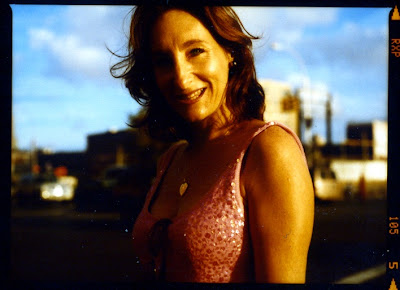 (Blogger’s Note: Fiona Bloom is another Twitter Connection I made via Sharon Carpenter of BET. Once I read the website of Fiona, I was blown away! She has an array of gifts and is heading this week to narrate a Beatles Tribute for over 2,000 soldiers at the Fort Monroe Army Base Concert on August 13th in VA Beach. I went one-on-one with her about her ventures.)

Brother Jesse: Please give me a little background about yourself.

Fiona Bloom: I was born and raised in London, England. Iâ€™m a classically trained concert pianist. Studied music and theatre intensely from age 4-22. Music is my lifeblood and in my veins and the acting part- well letâ€™s just say- I love the stage- but Iâ€™ll let my artists be on stage and I just spectate- unless of course Iâ€™m the host and up on the mic introducing the acts and the night…That gets my adrenalin flowing…

Brother Jesse: How and when did you get involved in the music industry?

Fiona Bloom: Well if you count being a musician (which I do), I started when I was 5 but as far as the â€˜businessâ€™ side of things…Started when I was 26… I was so knowledgeable in the music as a historian/lover of it and art appreciator that I didnâ€™t even come to realize record labels existed until I was working at a radio station…I studied liner notes, back to front inside out sidemen, producers, musicians, lyrics and never even noticed the logos on bottom till one day one of my DJâ€™s at the station was trying to get an interview with A Flock of Seagulls and had to call Arista to set it up â€“ I was like who???

Brother Jesse: Who are some of the artists you have helped to launch their careers?

Fiona Bloom: Umâ€” so many to be honest and some I donâ€™t really get the credit for but here you go-MF DOOM, Blackalicious, Atmosphere, Sway as far as Stateside-heâ€™s a UK MC- Anthony David, Wayna, Roxy Cottontail, DJ Spinna, Proton, Miz Metro, Swollen Members in U.S, Maya Azucena and many others..

Brother Jesse: What are some major projects you are working on?Fiona Bloom: Iâ€™ve been working on this multi-installation art mash up called Project Art which hopefully will be a National Series. Iâ€™m co-producing a big World Hip Hop showcase during CMJ- October 21st…My 3rd big event for them. Iâ€™ve also been developing this very young artist who has been blogging for me for quite a while â€“ Miz Metro- sheâ€™s so talented, web savvy, great blogger, multi-faceted…The blog called Miz Metro Mondayz on The Bloom Blog….Sheâ€™s releasing her debut album this month called â€˜Unlimitedâ€™ and weâ€™re getting a ton of exposure/visibility and lots of label interest….. Iâ€™m also in the works for a big website launch…Canâ€™t disclose at this time and The Bloom Effect has put in bids for other major clients which Iâ€™ll know about shortly!

Also, I just picked up Beat Kangz Electronics new product thatâ€™s launching called Beat Thang Music production unit and Beat Thang Virtual software. The Beat Thang virtual is going to be what Guitar Hero has become in the Rock World for Urban Music!- This is serious and a must own for any producer/DJ/Remixer.

Brother Jesse: Please explain what the “Bloom Effect” brand is.Fiona Bloom: The brand/entity is my baby so thereâ€™s tons of passion exuding from the sound, aesthetic, ideals, vision…Itâ€™s great because when I promote or network and hand out my postcard or business card- the first thing people say is – â€˜love the nameâ€™ and itâ€™s so bright/colorful and vibrant…Thatâ€™s pretty much The Bloom Effect- and of course The BLOOM is very important- I help shape/grow an artist/brand. I create The Bloom.Itâ€™s a marketing/consulting and social media company– My work ethic is a little different from most businesses as I feel very attached to the early stage of career-shaping and molding/developing….Itâ€™s more challenging and risky but way more rewarding and personally fulfilling!

Brother Jesse: You recently took a trip across seas to Israel. What was the purpose?

Fiona Bloom: To see my family, and for some R&R which I needed badly and to make contacts/build relationships and scout urban Music/Culture over there which I found a great deal of including a Hip Hop group Iâ€™m representing now called Coolooloosh…They recently completed a U.S. tour! I also picked up another blogger out there….Every Tuesday is all about Urban Culture direct from Israel called Andrea Asis- The Juice of Tel Aviv…Very excited about that and of course the Israeli Consulate has been helping promote my blog and spreading the word on all the research I brought back….In fact- working with them on an amazing project for 2010….An Israeli Urban Culture Festival.Brother Jesse: Do you think Hip Hop does a good job of honoring the contributions of women?Fiona Bloom: I think Hip Hop is making some progress honoring and acknowledging women. Thereâ€™s a great book that everyone coming up in the Hip Hop culture should own called â€˜Put Your Dreams Firstâ€™ – Handle Your (Entertainment) Business written by Thembisa Mshaka â€“ she features 90+ powerful women in the biz- their journey/stories- real talk and purely encouraging and inspirational. Iâ€™m also featured in the book by the way- Iâ€™ve been told by numerous people that my story is inspiring which is nice to hear – so my struggle is worth it!!! Also another remarkable woman recognizing Women in Hip Hop is Martha Diaz…She started the Hip Hop Association and also H2O Film Odyssey….

Brother Jesse: What are five songs in heavy rotation in your I-Pod?

Fiona Bloom: I have so many but hereâ€™s my 5 thatâ€™s current…

Brother Jesse: For those who think public relations and artist management is easy, please talk about the behind the scenes work.

Fiona Bloom: Easy- wow- first off nothingâ€™s easy-:-) Itâ€™s literally 24/7..Canâ€™t stop, wonâ€™t stop- thatâ€™s literally how you have to be all the time…Thereâ€™s no break, no vacations, no nothing….Well thatâ€™s if youâ€™re as dedicated and love it as much as I do…. Weâ€™re at shows, weâ€™re on the phones, weâ€™re answering hundreds of emails…We have to be on point with follow through- have thorough conversations and be clear with detail…Social media- this is as equally as important as the day to day emails/phone conferences…Now we need to Tweet, update our status, blog, text campaigns, as well as the day to day traditional publicity and making sure the artists/clients are happy and equally busting their butts as hard as me!

My artists have to be hungry and have the work ethic I have- so itâ€™s hustle all around! Hope that makes sense…I can go deeper but that would take over your entire blog Jesse and I donâ€™t think youâ€™d want that! I do give workshops from time to time â€“ in fact I recently did one at NYU!Brother Jesse: Thank you.
Â
(For more information on The Bloom Effect log on to http://thebloomeffect.com and http://www.thebloomeffect.com/blog)
Blog Interview: Fiona spreading The Bloom Effect worldwide in marketing, branding and music. was last modified: July 14th, 2015 by BJ Blog Staff
englandFiona Bloomlondonmusic

Vaccination and Anti-Swine Meat Campaigns underway. Educate Yourself and Save Lives!

CHILDREN OF THE MOST HIGH: The Sound of Music

CHILDREN OF THE MOST HIGH: Righteous Nepotism

Video: “Children of the Most High” 2019 Book Tour Recap

Brother Ben X, a young Muslim on a mission

The Final Call Chronicles: As Men, We Must Protect Our Daughters

Blog 1-on-1: Margo Williams Handy shares PR strategies, business lessons, and what she could bring to the White House