We know her as the godmother of the civil rights movement and at this moment she needs our prayers.

According to news reports, Black icon Dorothy Height is in serious but stable condition in the intensive care unit at Howard University Hospital in Washington,D.C., as she recovers from a bout with an illness.

According to the National Council of Negro Women’s website, Ms. Height has been on the battle field of the civil rights movement since 1933, the same year she became a leader of the United Christian Youth Movement of North America. “It was during this period that Height’s career as a civil rights advocate began to unfold, as she worked to prevent lynching, desegregate the armed forces, reform the criminal justice system and for free access to public accommodations,” the website states.

We love and appreciate you Ms. Height. We pray for your speedy recovery and thank you for your decades of service and sacrifice….we as young people need to step it up more. 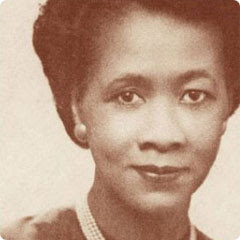 Death Row Inmate: “The Final Call newspaper helped to save my life”

Farrakhan speaks on Pres.Trump and The Unraveling of a Great Nation

10,000 Fearless of the South Partnering with Home Depot to host “Making Our Community a Decent Place to Live” Day