Beyond the Surface: Interview with Bro. Demetric Muhammad of Memphis, Tennessee

(Blogger’s Note: Brother Demetric is one of the featured presenters at the upcoming Spiritual Bootcamp 2009 to be held at Muhammad Mosque No. 45 in Houston. The bootcamp takes place on June 6 and is the brainchild of SW Regional Student Minister Robert Muhammad. I went one on one with Bro. Demetric who resides in Memphis, Tennessee on the need for deeper study and the importance of this bootcamp.)

Brother Jesse: Please give me a little background about yourself.

Brother Demetric: I have been in the Nation of Islam for about 19 years now joining as a teenager in 1990. I have worked professionally in the field of management and supervision and have worked within our nation as an FOI selling The Final Call, cleaning the mosque and whatever I have been asked to do. I joined the ministry class under the tutelage of Student Min. Anthony Muhammad in Memphis,TN in 2000. Since then I have been active in propagating the Teachings of the Honorable Elijah Muhammad in the city and in various locales throughout the mid-south area. Currently I work as the Islamic Chaplain for the Division of Corrections in Shelby County,Tennessee.
Brother Jesse: When and where did you first hear the Teachings of the Most Honorable Elijah Muhammad? What was it about His words that captured you?

Brother Demetric: I first heard the teachings around 1989 in Mississippi. I had always had a love for Black people and my father had instilled this in me as a child by exposing me to figures of Black history and the movie Roots.
Brother Jesse: What success have you had personally as a follower of the Honorable Elijah Muhammad under the leadership of the Honorable Minister Louis Farrakhan?

Brother Demetric: I had always as a child been very shy and hated having to speak in public or anything like that. I never had very good study habits either, though I made good grades. When I learned of the teachings in high school I began to change becoming consumed with trying to find everything that I could written by and about the Nation of Islam and the Honorable Elijah Muhammad and Minister Farrakhan. The teachings and training of the Nation of Islam have made me a better communicator and caused me to ascend to positions of leadership wherever I have gone professionally. I have now been married for nearly 11 years and am rearing 3 beautiful children along with my wife. I was recently honored by being invited to conduct a workshop at the annual Saviours’ Day convention in Chicago. I am working on a second book in a series of resources for believers in the teachings of the most Honorable Elijah Muhamad and Honorable Minister Louis Farrakhan. My first book that was a collaboration with Brother Ilia Rashad Muhammad was published in 2008 and is titled In The Light of Scripture. 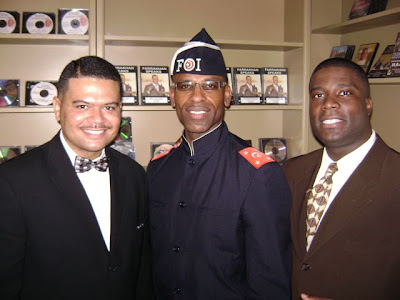 Brother Jesse: What inspired you to be an author? Do you think more Believers in the Nation of Islam should write books? What impact would it have?

Brother Demetric: The first book was written to be of a help to myself (smile). Teaching in the mosque and in the prison I desired a resource that would make it easy for me to access the relevant scriptures from Bible and Quran that defended and explained the Teachings. Over the years working on assignments for Bro. Anthony I also had become very familiar with the resources that were available in Christian Bookstores for Christians. These stores have vast amounts of resources for Christian Life, Worship and Study. We would always have to adapt them for our uses and would have to “take some and leave some” in terms of the content. So my first book is a resource for us. It is the first of many I hope to produce. Currently I am putting the finishing touches on my second book: A Complete Dictionary of the Supreme Wisdom Lessons. There are 1542 words in the lessons and we defined them all. In the Original Rules of Instruction it reads…”and there is more to be understood in the words.”

I seem to recall Minister Farrakhan saying that we let everyone else tell our story and we don’t tell our own story. So we should commit our life’s story going from a Negro to a believer in Islam to paper. That causes it to survive for our posterity. We should also add to the available literature on the religion of Islam and Islamic scholarship. The Nation of Islam has been admired and emulated by many. However most don’t really know of the deep and profound theology that undergirds that which they admire. So we must start to showcase this. Elijah Muhammad received a revelation from God; period. That is good news to people who believe in God. Subsequently, Louis Farrakhan as Elijah’s help-meet has also received revelation from God. If we now create a universal audience for these two facts and prove it based on the books of God we have the affect that Master Fard Muhammad desired we have and that is to draw humanity back to the straight path of God following our example.

Brother Jesse: After reading many of your emails, I have observed that you have a passion for research. What is your aim in delving deeper into the Word of God? Why is dialogue on this subject matter important?

Brother Demetric: I have heard Minister Farrakhan warn us against being superficial surface dwellers always skirting on the surface of wisdom and never delving deep into the wisdom to mine out the pearls of wisdom that is the exclusive reward of those who will make the effort. The Holy Quran says that if the seas were ink and the trees were pens with an additional set of seas added on we could never exhaust the wisdom of Allah. I as, all of us do, have a finite amount of time on this earth and as a result we should desire, in my opinion, to come into contact with as much of Allah’s wisdom as we can so that it might enrich our lives immeasurably.

Also our assignment as helpers or ansars to Allah’s apostle begs that we deepen our study. In the Holy Quran 28:51 Allah says that he made the word to have many connections. That is a key in my opinion; it is an impetus; a call for scientific investigation to prove and uncover the connections of everything in life to the Word and Will and Person of Allah. We have a world to build and the early Muslims after Prophet Muhammad(PBUH) were moved by the revelation he received to connect it to architecture, medicine,music, government, jurisprudence, agriculture,biology and all human endeavors. So their history is the Golden Age of Islam and because of their connecting the Word of Allah to the world around them and being instructed thereby.

Again Minister Farrakhan is our example. He does a keynote to a group of Educators and connects the subject of education to Jesus’ 7 “I am” statements. In an interview with Bro. Jabril he connected the chaos and entanglement of people to the subject of language and word meanings. So we should follow him and begin to build institutions that reflect the Word of God.

Brother Jesse: How valuable do you see the upcoming Spiritual Bootcamp being organized by Student Minister Robert Muhammad of Houston?
Brother Demetric: I love Bro. Robert. His youthful enthusiasm after all these years in the labor is contagious and encouraging to young brothers like myself who see him, Bro. Anthony and others as stalwarts for Islam and the Ministry of Farrakhan Muhammad. I see this as the first of many events. In the late 90’s Bro. Jabril use to travel around and do this series called “tightening up the house.” In it he was trying to do what I believe Bro. Robert has in mind and that is to prepare the believers of the Nation of Islam under Minister Farrakhan’s leadership for what lies ahead of us. I think that it is in the Holy Quran 2:214 where it talks to the believers about ‘do you think that you will be left alone while there has not yet befallen you the like of that which befell those before you…’ The Minister has shared with us that Point No. 12 is the cardinal point around which the Nation fell in 1975. It is our foundation. Yet how strong is our foundation? Does the “lay-believer” have the confidence in his or her ability to communicate what they believe to others. We are suppose to fish right? Well how effective can you be if you don’t have a tackle box or toolbox that gives you what you need to catch the fish? We have some controversial teachings. Can you or I explain them to say Christians, Sunni Muslims, Athiests, Kemetist or Nationalists or Agnostics?

Confidence always breeds success. We all try to instill confidence in our children so that they can be successful in the world. Confidence is also attractive as a quality and is a leadership quality. I think that this conference will be valuable because it will instill confidence in the believers that they are with the right leader in Minister Farrakhan and with the right teaching and religion-Islam as taught by the Most Honorable Elijah Muhammad.

CHILDREN OF THE MOST HIGH: Mommy’s Favorite

My Million Man March Experience: 13 years ago on this day

Minister Farrakhan: “We are going to get through the dark hour.”

A Must See Video: The Poor Righteous Teachers: The Influence of Islam on Hip Hop

::Interview:: Faith In A Time Of War – The Exclusive w/ Dr. Wesley Muhammad

Thank you from Brother Jesse Blog