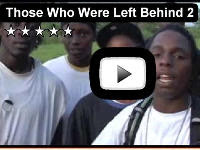 WARNING: THESE VIDEOS MIGHT MAKE YOU GET UP AND DO SOMETHING

The crisis of poverty in the Black community has sparked the Poor Peopleâ€™s Campaign, the Gathering of Hearts Organization and the Nation of Islamâ€™s South haven Study Group to mobilize a public hearing and march in the Delta of Mississippi on June 19.

â€œSomeone has to help shed light on the living conditions in places like Louisiana and Mississippi. No one should have to live like this, no where in the world and especially not in America,â€ said Antoinette Harrell.
Ms. Harrell is the co-founder of Gathering of Hearts and has organized poverty tours for the last six months in both Louisiana and Mississippi. She led another tour on June 19 followed by the public hearing at Quitman County Elementary School in Lambert, MS. The march will took place on June 20 in Jackson, MS.
â€œTo see people without clean water, living on dirt floors and having nothing for the children to even play on is horrendousâ€, she said. â€œEvery citizen has a human right to these things but the people of Mississippi are being robbed.â€
JOIN THE DISCUSSION ON GLOBAL GRIND.COM AT:http://globalgrind.com/content/741231/Americas-Newest-Nightmare/
“America’s Newest Nightmare” Join the discussion on GlobalGrind.com was last modified: July 13th, 2015 by BJ Blog Staff
black americaglobal grindPoor People's CampaignPoverty

Mediocrity is NOT In Your D.N.A….So Why Do We Settle For It?

The Final Call Chronicles: Despite the Rain, Allah Had Other Plans for Us