In what is being hailed as a ground breaking decision, a federal judge recently ruled that the Army Corps of Engineers were directly responsible for flood damage in St. Bernard Parish and the Lower 9th Ward following Hurricane Katrina, due to poor management of maintenance at the Mississippi River- Gulf Outlet (MR-GO).

â€œThe failure of the Corps to recognize the destruction that the MR-GO had caused and the potential hazard that it created is clearly negligent on the part of the Corps,â€ said U.S. District Judge Stanwood Duval Jr. in his ruling on Nov. 18.

The judgeâ€™s ruling in a civil lawsuit could result in the government handing out $700,000 in damages to the plaintiffs, which includes three residents and a business in those areas. The ruling includes some 100,000 homes and business in the defined areas.

â€œFurthermore, the Corps not only knew, but admitted by 1988, that the MR-GO threatened human life. Yet it did not act in time to prevent the catastrophic disaster that ensued with the onslaught of Hurricane Katrina,â€ said Judge Duval in his ruling.

â€œThis is huge. This was a surprise but a pleasant one. I hope the decision will open up the floodgates for others to file lawsuits against the federal government,â€ said New Orleans Mayor Ray Nagin.

â€œThis ruling highlights the fact that Hurricane Katrinaâ€™s damage was exacerbated by the failure of the Corps of Engineers to properly operate and maintain water resources projects in Louisiana,â€ said Gov. Bobby Jindal.

â€œI hope this decision will serve as a catalyst for the corps, Congress and the administration to aggressively move forward on hurricane protection and coastal restoration efforts in Louisiana,â€ Gov. Jindal said.

The legal team representing the plaintiffs is pressing the Obama administration to move swiftly to compensate their clients and the other impacted residents.

â€œItâ€™s time that we stopped litigating and we started negotiating,â€ said Los Angeles-based attorney Pierce Oâ€™Donnell, who co-represented the plaintiffs.

â€œThe day that the fi rst explosion was delivered to the cypress forest to begin digging and developing the MR-GO was the first day of public outcry that this was going to be the ruination of St. Bernard Parish,â€ said Craig Taffaro, St. Bernard Parish president.

â€œIn terms of the judicial process, this decision is revolutionary. In terms of social justice, itâ€™s a start but itâ€™s not enough. Itâ€™s not over yet,â€ New Orleans activist Mtangulizi Sanyika, told The Final Call.

â€œItâ€™s a bittersweet victory in the sense that: yes, we are at the table, yes, we are grateful for the judgeâ€™s ruling, for the legal team to deliver us to this point.But what a shame that we had to go through such devastation and destruction to get here,â€ said Mr. Taffaro, who hopes his parish will also receive compensation for damages reportedly exceeding $1 billion.

Community leaders see this as a much needed victory against the federal government that could set the stage for compensating thousands of victims for billions in claims filed the last several years. They are also worried about the damaged areas being exempted from the judgment, because Judge Duval said MR-GO did not affect the levee system protecting areas such as eastern New Orleans.

“I think the judgment is a small step in the right direction, however, what about those who live outside of the Lower 9th ward, which was impacted by the breeches of levees inside the city that were suppose to protect it? The lawsuit doesnâ€™t benefit them,â€ Willie Muhammad of the Nation of Islam told The Final Call.â€œMany are not pleased that the judge did not see fit to include the east side,â€ said Mr. Sanyika, who heads the African-American Leadership Project. â€œWe will be meeting in the next few weeks with officials to see how we can get others included.â€

â€œThe buzz in the community is that we would have loved for it to include the east side residents because they suffered too,â€ activist Malcolm Suber told The Final Call.

Read this full story and more in the latest edition of The Final Call Newspaper at: http://www.finalcall.com/artman/publish/National_News_2/article_6594.shtml
(Photo above is during the 2007 Katrina Anniversary March in New Orleans. Photo by Jesse Muhammad) 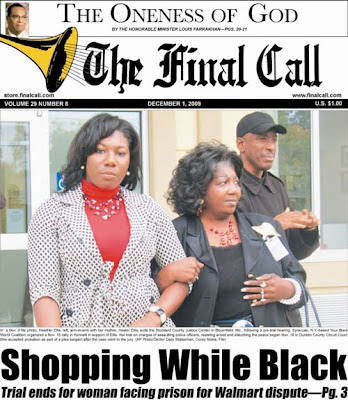 This Week With Jasiri X: Dr. King’s Advice to President Obama on Afghanistan

“Beyond the Headlines”: Sam Houston State Association of Black Journalists to host panel on AIDS in the Black community

ICYMI:: 7 Video Clips That Made Social Media Explode Over The Weekend!

“Beyond the Headlines”: Sam Houston State Association of Black Journalists to host panel on AIDS in the Black community

Farrakhan: Putting the face of Harriet Tubman on the $20 bill is an INSULT!

Minister Farrakhan releases statement on the passing of Muhammad Ali