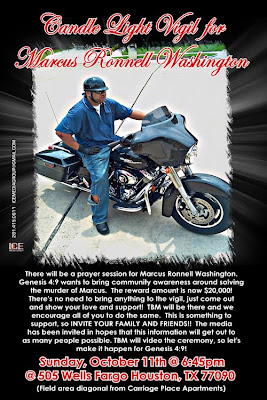 Activists, Family, Friends, Local Residents and Elected Officials Gather for Candlelight Vigil
Houston, Tx: Over 200 people have confirmed to attend when a local family announces that it has personally put up a $20,000 reward for anyone who can give information leading to the arrest of the party(s) responsible for the death of Marcus Washington.

Washington, a 35 year old Halliburton employee who was only a few months away from receiving a Masters Degree from the University of Houston, was found in his apartment shot to death on July 3rd.
He had been given the day off by Halliburton to celebrate Independence Day. An eyewitness claimed she saw 3 young males outside Washingtonâ€™s apartment shortly before it is believed he was murdered. Authorities have yet to arrest any suspects.Tomorrow, Sunday Oct. 11th, activist Deric Muhammad, Houston City Councilman Jarvis Johnson and hundreds of others will stand with the Washington family in a call for residents in the area to speak up if they have any information.
Area residents have seen a huge spike in crime in the area and believe Washington may have been a victim of a random robbery â€œgone badâ€. Activists are not satisfied with the apparent slowness of the Washington investigation and are calling on the community to get involved.
â€œWe should not be afraid of what will happen if we come forward with information leading to the arrest of the real culpritsâ€, said Muhammad. We should be afraid of what will happen if we donâ€™t.â€

The Washington family has circulated hundreds of flyers in an effort to gather information. Several people have come forwarded, but no one has been arrested. Now they have taken their journey for justice to the next level by raising the reward anteâ€™ by $20,000. The funds have already been registered with Crimestoppers.

The brutal beating death of 14 year-old honor roll student Derrion Albert in Chicago has sparked a nationwide sense of urgency to stop the senseless killing in the Black community. The murder of Marcus Washington is but one local example of a nationwide problem. We must wage war against the violence that takes the lives of innocent human beings like Washington.Where: Carriage Place Apartments (where the murder occurred) located at 505 Wells Fargo St. (Northwest Houston)

‘No Justice, No Profit’ as not spending becomes weapon for justice

Hurricane Ike Update~Was it wise to ride it out??

‘LOVE YOURSELF: The Original People of The Earth’’ (A Message to Black Youth)

History made: The confirmation of Sonia Sotomayor is official!

#DEFENDINGFARRAKHAN 2018 and calling for a Showdown in 2019